“Godspell”: a vision of spirituality and social justice at Enon 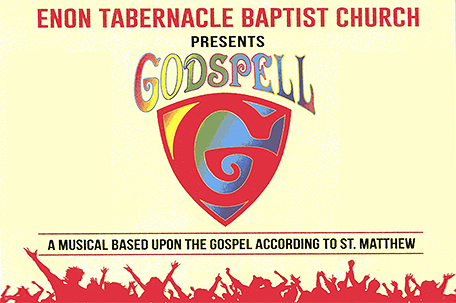 The musical “Godspell” — often remembered as a timeless tale of friendship, loyalty and love, has touched the hearts of countless theatregoers all over the world. The often-performed productions of an offbeat group of disciples helping Jesus bring his enduring parable to life through a series of games, exciting stories and unforgettable songs still resonates with audiences.

At Enon Tabernacle Baptist Church, the nearly five decades-old musical was brought to life by an eclectic troupe of players who stirred the soul, raised the spirit, and lifted the audience right out of their seats. This modernized version still grappled with the eternal question: How can spirituality survive in a stubbornly material world?

This new production, directed by Rev. Dr. Alyn E. Waller, Enon’s senior pastor, asserts from its first moment that this is not your original “Godspell”. On the contrary, it insists, with eagerness, that the story of Jesus and his apostles is still timely. The musical, performed Sunday, April 14th and Monday, April 15th, was presented in cooperation with The Philadelphia Engagement Project.

The musical does reference current social movements and convention. Because “Godspell” celebrates the idea that the spiritual life is of paramount importance, among the many parables enacted, there are several reminding us that an obsession with the wrong things will land you on the wrong side of Judgment Day.

But while some of the “Godspell’s” jokes and light banter were humorous, and the audience seemed to enjoy them, one eventually begins to wonder: If the story of Jesus and his apostles cannot be treated as timeless, what on earth can?

The score was also modernized for the new production under the direction of musical director Austin Woodlin. The small orchestra created a musical mélange infused with hymns, gospel, funk, soul and rap, in addition to the original score that included folk, some pop and rock.

The exuberant cast was evocative of earlier renditions of the play, culturally inclusive and clothed in the whimsical, quirky attire that was characteristic of the 70’s. The youthful-like spirit of the show did not infantilize the show’s moral and spiritual subject matter. In addition,  the language was adapted from modern versions of the bible.

Enon’s production of the oft-seen “Godspell” might have seemed a repetitive undertaking, but the evangelical 1971 hit by Stephen Schwartz featured a gender-blind cast led by Philadelphia’s Jaron Elijah Hopkins playing Jesus and Gregory Holmes, Jr. as John the Baptist and Judas; both are high school and college students, respectively, and have performed as actors in professional productions.

Hopkins brought such energy to the show, that the cast seemingly revolved around the vitality of his performance. His bright smile, engaging attitude and confident voice had the audience captivated and in the palm of his hand, praying for more by the show’s end.

Holmes embraced the formulated aspect of the production, as well as the jesting, taking his cast on a joyous ride—and the audience traveled happily along with them. The cast of 23 was spirited, with wonderful singing as the Company. There were also solo performances that included such songs as “Day by Day”, “O Bless the Lord of My Soul” and “Learn Your Lessons Well”. The performers included Torri Grice, Kim Dobson, Jacquee Pate, Brian Dandridge, Candace Benson and Nadir Gray.

Overall, “Godspell” was a fun-filled two hours of theatre. Rev. Waller, cast and crew created a piece of such joy and playfulness wrapped in a modern-day quest for spiritual understanding.

Attendees like Marva Johnson, of West Philadelphia, attested to the relevance of the musical’s message.

“Today, we have so many social issues impacting our society,” said Johnson. “Venues like this let us know that religion is relevant and that the church can lead the charge for change.”

The pastors of the seven participating churches had been meeting monthly, under the leadership of Waller. They have assisted each other for the past six months, identifying the depth, length and height of the gospel of Jesus Christ using the 11 parables highlighted in “Godspell” as they ministered to their congregations.

“The cooperative effort that produced “Godspell” will culminate with the pastors and religious leaders writing a joint statement that will be made public to Philadelphia about social justice issues as informed by the 11 parables,” explained Waller.

Additionally, one of the project collaborators, The American Bible Society, will publish 40 brief devotionals on the subject of the 11 parables, which will be written by a diverse group of pastors across ethnic and denominational lines. “This partnership will benefit our beloved city of Philadelphia,” said Waller, who noted the culminating platform will allow the religious community to address social justice issues.

The Philadelphia Engagement Project, according to Sam Harrell, the American Bible Society’s director of national partnerships office in the U.S., allows the partnership to demonstrate that the Bible may be a tool for justice and not just piety.

“The American Bible Society was founded in Philadelphia over 200 years ago with the intent of getting the word of God into the hands of those who peopled the newly formed nation,” said Harrell, who also noted the city of Philadelphia’s rich history of social justice in the major issues confronting a new country.