God is doing this thing HIS way 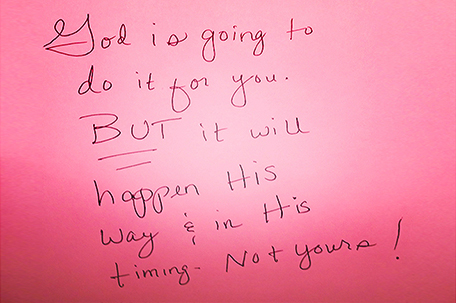 On Sunday morning, I stood behind the podium and wept. I tried to pull myself together because I was the morning speaker. The congregants were sitting in their seats, prepared to hear the word of God and initially, all I could do was weep.

I was overcome with emotion because it was the first sermon I was able to minister since the Lord miraculously healed me a month ago. Standing there, having strength and full use of my limbs, doing what I know I’m called to do, filled me with a greater level of gratitude than I’ve ever felt before.

Seeing those faces of family, friends and loyal members in that intimate setting got me in the heart. It didn’t help that my mother introduced me and talked about how she saw a flyer the other day for the “50 Women Praying” service. Mom said she read the line about interceding “for the healing of Dianna Hobbs”and then said to herself, “God did it!”

Reflecting on it took me back and overwhelmed me.

While clenching the microphone, each time I tried to articulate my thoughts, my voice broke up and the tears flowed.  Eventually, I was able to pull it together and the Lord brought forth a mighty word. He moved by His power and I’m grateful.

When I was going through it all, it felt like forever went by before God moved in my situation. Day after day I was weak, hurting and begging God for relief. If felt like “Groundhog Day” in my life, in that, nothing was changing. I woke up every day to the same issues.

“God, what are you doing?” I wondered at times.

Now I know the answer: He was doing things His way, not mine. He had a plan all along to heal me at the appointed season, but not a day sooner. My trust, confidence and belief in His power to move set the stage for me to receive manifestation. Yet, none of that changed the fact that He is sovereign and I had to wait for my set time.

In life, whatever you’re going through — whether that be illness, relationship troubles, financial problems, emotional issues, work-related turmoil, or ministry setbacks — you have to trust God to rectify things His way.

Releasing your notions and ideas about the way things should go is a must. Otherwise, you’ll be discouraged and perpetually frustrated. You see, when it comes to divine healing and working of miracles, God does what He wants to do, when He wants to do it, and how He wants to do it.

Friend, in order to receive what God is releasing with a heart full of gratitude and expectation, you must remain open.

He is loosing chains, breaking down strongholds, releasing harvests, working miracles, opening doors, destroying yokes and doing a new thing. But here’s what you have to know: what you’re waiting for won’t happen the way you’re expecting it to. God’s will rarely falls in line with our way.

If you can prepare your mind and open your heart to accept God’s will, you will be perfectly positioned to reap the next harvest coming your way. It is indeed coming.

If you’ve been praying for an instantaneous release, but your breakthrough seems slow manifesting, consider what God said to the biblical prophet Habakkuk who was frustrated because God had not moved against Israel’s enemies. He wanted to know why the Lord hadn’t acted yet.

In Habakkuk 1, he complained to God that opposing nations were terrorizing them, worshiping false gods, doing all sorts of wrong and still seemed to be relaxing on a flowery bed of ease.

He said in verse 1, “How long, Lord, must I call for help, but you do not listen? … I will climb up to my watchtower and stand at my guardpost. There I will wait to see what the LORD says and how he will answer my complaint.”

As he awaited God’s response, Habakkuk stood at his watch or in a “watch tower,” which was an elevated platform that served as a security or early warning system if enemies were invading. Watch towers were popular among families in ancient times. During harvest time, enemies and critters would infiltrate and steal crops. So families would sleep in these towers and take turns watching to keep intruders from robbing them. The guardpost that Habakkuk mentioned also provided reinforcement, defense and fortification.

So then, consider how powerless Habakkuk felt standing in a watch tower designed to protect him from enemies and not be able to stop the attack.

But God had an answer for the Prophet’s complaint, which is what I’m stirring into your cup of inspiration today. It is found in Habakkuk 2:2-3, which says, “Write the vision and make it plain on tablets, that he may run who reads it. For the vision is yet for an appointed time; but at the end it will speak, and it will not lie. Though it tarries, wait for it; because it will surely come, It will not tarry…”

As you drink down the contents of your cup, remember these words: Breakthrough will surely come. It won’t necessarily happen how or when you want it to, but it will happen!

God told Habakkuk that the enemy would not rule forever. Ultimately, the Sovereign One would get vengeance and deliver His people. So in the midst of the delay, Habakkuk was not to assume that meant denial, because God was going to act. The Lord was going to move.

Friend, trust God.  He knows exactly where you’re headed. He has a plan for your life. In fact, the Lord, in His infinite wisdom and with His impeccable timing, has preordained the exact day and time of your set time.  He’s doing this thing His way.

Simply wait in anticipation of what awesome things are coming your way. It won’t happen the way you expect it. In fact, it will be better.

Your day is on the way. I’m a living witness!

God Is Going To Make You Fruitful