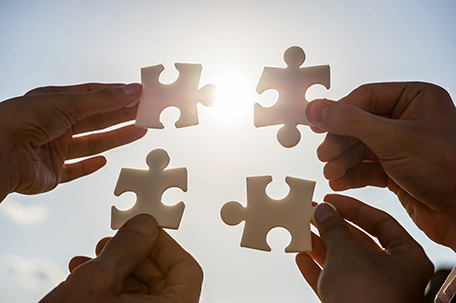 I warned him but he didn’t listen. When the children cried and begged to leave their Christmas present on the living room floor, he knew I had been right all along.

Kenya and I laugh about it now, but he was stunned when, several years ago, the gift he thought our little ones would enjoy turned out to be a torturous, epic fail.

“They’re not going to enjoy that,” I had previously told my husband when he showed me the thousand-piece puzzle set he was considering purchasing for Christmas Day fun.

“There are too many pieces and this will frustrate them,” I added. “They’re too young to stay focused on one thing for the amount of time this would require to put together.”

All four of them were much younger then. I was well aware of how short their patience was.

“They like puzzles though, and I think they’ll like this one too,” Kenya insisted, convinced he was on the right road.

“Okay, if that’s what you want to do, go ahead,” I relented. I realized he felt confident in his gift-picking abilities and knew he would simply have to see the reaction for himself to learn the lesson.

When the children first saw the puzzle, they were beside themselves with joy. Everyone was grinning, eager to take on this new challenge. As the Christmas lights flickered on the tree and the smell of sugar cookies wafted through the air, the joy of the season filled the Hobbs home. They dumped out all the puzzle pieces, hovered over them and went to work.

After a few hours passed of unsuccessfully putting the pieces of the puzzle together, however, those smiles gradually turned upside down. Finally, the children were over it. They started sobbing.

“We don’t want to do this puzzle anymore,” Kyla, the oldest, said.

She shook her head no.

None of them did.

Kenya later found out that they didn’t want to disappoint him or seem ungrateful. That’s why, for as long as they could, they feigned enjoyment. They labored for hours, combing over the oddly shaped pieces, spreading them out on the floor, trying to figure out how they all fit together. But it got to be too much. They wanted to play with their other toys and be free from this difficult task.

The puzzle was too puzzling—pun intended.

“I guess you were right,” Kenya said, with a shocked look on his face that day. “I really thought they would like it.”

I told him, “It was just a little too advanced for their age. Maybe a puzzle with less pieces would be more fun.”

Sometimes, life feels like a difficult puzzle, doesn’t it? You don’t know how things fit together. God may have shown you a vision; you might have some idea of what life is supposed to look like; you know what His word says; and you cling to His promises.

Yet, all you have are a bunch of scattered pieces and fragments. In your heart of hearts you want to know exactly when your circumstances will become a reflection of the good things God has revealed to you. Like the picture on the puzzle box, you see, in theory, what the end result should be. But from your vantage point, it looks like you’ll never get everything in its proper place.

What do you do?

First, here’s a bit of good news for you: God doesn’t expect you to put the puzzle together yourself. He’s not asking you to be responsible for making things work perfectly. That’s His job. He is fully aware that you are limited in your ability and understanding. Your wisdom and strength are not enough to get things in order.

There are some things God has already worked out in your favor. His handiwork is about to manifest!

In fact, He’s been waiting for you to come to Him like Kyla came to Kenya, crying out, I can’t do this on my own. I need your help.

Friend, this situation is too puzzling. The obstacle is too great. The challenge is too much for you… but not for God. His wisdom never runs out. His strength is inexhaustible.

In Jeremiah 17:4 in the Message Bible translation, the Prophet said, “God, pick up the pieces. Put me back together again…”

Let this be your prayer today.

This request from Jeremiah is found in a chapter where the people of Judah were in a sinful state. He was declaring the word of God and telling people to turn back to the Lord, but no one was listening to his message. Making matters worse, Jeremiah had enemies that were after him. His life was in danger and disarray. He was trying to do the right thing by relaying the divine insight God had given him to others, but it seemed to all be blowing up in his face.

Ever been there, where nothing was working?

That’s where he was. The people weren’t changing. His plight was getting worse. Those who hated him were mocking both Jeremiah and the God he said he represented. He told the Lord that his opponents and detractors said this: “So where’s this ‘Word of God’? We’d like to see something happen!”

He was a laughingstock and outcast. People were challenging Jeremiah and suggesting his prophecies were made-up lies, no more than silly fairy tales. This felt awful and it was a very difficult season for God’s servant. He needed the Lord to put the pieces of his life together, protect him and make him victorious over the enemy.

Today, you might find yourself facing tough times, too. Like Jeremiah, you have been striving to be obedient and fulfill God’s will for your life. You have tried everything you know and done all you can to get things right. Nevertheless, your life is in disrepair and disarray. You don’t know which way to go or who to turn to.

At this moment, God is saying, turn to me.

He’s giving you an invitation to put down those scattered pieces and let Him put things together. Give up control. Release your need to figure it out.

Let Him do it. If you surrender in your heart right now, you can be assured, with no doubt, that God is putting the pieces together for you.

As long as you step aside and say, Lord have Your way, you will see a 180-degree change for the better. He will reveal the Romans 8:28 promise in your life, which is the familiar scripture I’m stirring into your cup of inspiration. It says, “And we know that all things work together for good to them that love God, to them who are the called according to his purpose.”

As you drink down the contents of your cup, declare by faith, God is putting the pieces together in my life. Say it like you mean it, too.

I know what you see may not reflect that declaration. But the more you let go and let God have His way, the more you’ll see things fall in place. He knows you’re overwhelmed and cannot take another step without Him.

That’s why, through this message, He’s telling you to let Him take the lead. You rest. You don’t have to do it. He’s going to do it.

And one thing we all know for sure is that He does all things well.