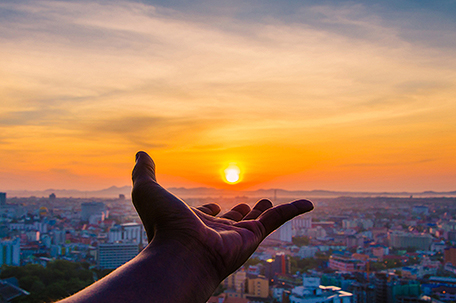 I soldiered on for them, even though every muscle in my body was aching and yelling, “Quit, woman!”

Sweat dripped from my chin onto my white t-shirt. I was soaking wet, panting and wincing.

Groaning with every kick, I kept on pushing during a recent workout session with our teenage girls, Kyla and Kaiah.

It was my first time ever trying Zumba.

I had heard for many years that it was a fun workout, which I found to be true.

However, it is also rather challenging.

The high-intensity moves and numerous repetitions had me feeling the burn, especially in my legs.

Despite the difficulty and wanting to give up, I didn’t.

I looked over at the girls and they, like me, were sweating and periodically grunting. So I knew they were feeling the pain as well.

I didn’t want to abandon them, even though lifting my legs was becoming increasingly difficult with each passing second.

How long do we have left? I wondered.

When it was finally over, I was relieved and completely spent.

After we finished, I didn’t pretend it was easy. I admitted that some of those moves were excruciating.

We each traded exhausted smiles.

Zumba was a big change for me. It pulled me out of my comfort zone, but I knew from the way I was sweating, I was getting a good workout. That changeup stretched me and also strengthened me.

Coming out of your comfort zone can be a good thing.

Spiritually speaking, when God pulls you out of your place of familiarity and comfort, and stretches you beyond the borders of what you have grown accustomed to, it’s a great thing.

That means He’s setting you up to bless you.

We know God challenged Abraham, the Father of Faith, to leave his native land and venture out into unknown territory.

In Genesis 13, we find him traveling with his wife and his nephew Lot, along with all the possessions he had.

This was before his name was actually changed to Abraham and prior to the covenant being established.

At the time, Abram was already materially rich. He possessed an abundance of silver, gold and livestock. But there was a divine calling on Abram’s life. He had been chosen for a special purpose.

Before knowing this, Abram and Lot settled down between Bethel and Ai, but it was too cramped, because they had too many livestock and other valuables to fit together in one place.

These guys couldn’t dwell comfortably or peacefully together in the same area.

In fact, the Bible says arguments broke out between the relatives’ herdsmen. It got so bad that Abram finally suggested to his nephew that they split up to make more room and avoid conflict.

Lot chose to move to the Jordan Valley in a place near Sodom.

Abram went his way and dwelt in a place called Canaan. At the time, he didn’t even know this was the Promised Land.

Hebrews 11:8 NLT says, “It was by faith that Abraham obeyed when God called him to leave home and go to another land that God would give him as his inheritance. He went without knowing where he was going.”

Abram was literally standing on the promise of God, but didn’t know it yet. The landscape was unfamiliar to Abram, but God knew all along exactly what He was doing.

I often say, the Lord knows the end from the beginning. If we follow His leading, we’ll get to the place we’re supposed to be.

Well, after Lot was out of the way and Abram had settled in, in Genesis 13:15, the Lord finally gave Abram some insight. He said, “Look as far as you can see in every direction—north and south, east and west. I am giving all this land, as far as you can see, to you and your descendants as a permanent possession.”

Before Abram even had an heir, God told him that his descendants would be blessed and as numerous as “the dust of the earth.”

You see, we’re reading this in retrospect, meaning, we already know how this story ends, right? We are aware that Abraham and Sarah will give birth to the promised child Isaac and through him, the nation of Israel, God’s chosen people, will multiply and flourish.

But Abram knew none of that. So God was speaking prophetically to a man who had no evidence that any of this would even come to pass.

And yet, he believed.

Then, in verse 18, the Lord said, “Go and walk through the land in every direction, for I am giving it to you.”

God gave Abram a walk-through and a preview of what was already his.

The separation was necessary for his elevation.

Today, if you feel stretched, pulled away from the familiar and uncertain about what the future holds, don’t get worried. God is doing a new thing in you too. He’s just setting you up to bless you.

He is enlarging you.

It may feel bad, but it’s working for your good.

Often, the process God uses to get us to our place of destiny isn’t what we prefer. Like Abram, that may mean leaving some relationships behind, disconnecting from certain associations, relinquishing old roles and taking on new ones, and occupying a strange place.

I know it might feel painful. It’s hard to step out of what you know and step into what you don’t. Trust me, I understand. I promise I do.

But the same God who led Abram to his place of promise, will lead you to yours.

Your unknown place may be filled with controversy, adversity, heartache and hardship, but God is saying, Just be confident in Me. I will never fail you. I’m setting you up for greater. All My promises are true. Follow My lead.

To reassure you that God’s word is coming to pass, I’m stirring Hebrews 6:15 NLT into your cup of inspiration, which says, “Then Abraham waited patiently, and he received what God had promised.”

As you drink down the contents of your cup, be assured that you, too, will receive what God has promised.

Greater things are on the horizon for you.

As you receive this word, I also ask that you come into agreement with me, not just for your season of greater, but also for the outpouring of favor over the lives of those who have asked to be included on our “Thoughtful Thursdays” intercessory prayer list.

While you read these requests and intercede for others, God will work in your life as well.

When is my time?