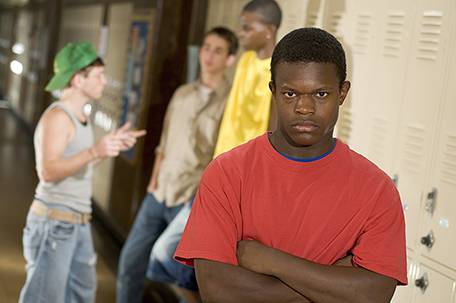 The road to destiny can feel lonely, but you are not alone. You are simply being set apart for greatness.

I’m reminded of an experience I had years ago.

My grade school friends and I were all standing on the thick white line in the school’s gymnasium. Our gym instructor, Mr. Thompson, was going in on our group because attendance was down in his class.

Even though I participated in gym class regularly, although I didn’t like it much, many of my schoolmates skipped out on it altogether.

When they did bother to show up, they did not come prepared with sneakers, shorts and a t-shirt—something they knew would automatically get them benched for the entire period.  A lot of the girls simply weren’t interested in perspiring and getting their hair all sweaty in the middle of the school day. Their hairdos were “fried, dyed and laid to the side” and they were intent on keeping it that way.

They were way more fashionable than me. I didn’t really care as much about that stuff. My puffy ponytail pretty much looked the same before and after gym. It wasn’t that serious for me. I just didn’t find volleyball, basketball or relay racing back and forth to be all that much fun.

But after the gym-skippers sat out or altogether missed several consecutive classes, our silver-haired, no-nonsense teacher had had enough. He felt everyone was getting complacent and way too comfortable with ditching his class.

So I stood there stiff as a board on that white line as he paced back and forth, red-faced, and clearly angry with us.  Other vocal, less fearful students giggled, cracked jokes and imitated burping and flatulence sounds while the instructor wasn’t looking. Then, when Mr. Thompson would swing his body around and say, “Who did that?” no one responded.

You know those childish games immature youth like to play.

In the middle of his yelling, fussing, cussing tirade, someone made a wisecrack about Mr. Thompson’s shorts being pulled up above his navel and his tube socks stopping just beneath his knobby knees.

Only that time, he caught the jokester in the act.

We all watched as the goof-off with slumped shoulders made their way to the Principal’s office.

Things got less funny to the class clowns when that happened.

Mr. Thompson shouted, reading off names from the sheet of paper attached to his clip board, announcing how many gym periods each of us had missed.

This went on and on until he came to me.

I can’t remember what the number was, but he told me, “You’re doing pretty well Ms. Brinson. Don’t hang around with slackers or you’ll end up like them.”

Frequently, Mr. Thompson would tell me that I had potential to be exceptional. “I know your family. You come from good people,” he would always say. He had taught my brothers in previous years.

“I have higher expectations of you.”

Whenever Mr. Thompson noticed me mingling with what he called the “bad crowd,” he made it his business to publicly scold me and ask, “Do I need to call Mr. Brinson?”

Uh-oh. That was not a threat I wanted to hear, because my father played no games when it came to monitoring the company I kept growing up.

Back then, I didn’t think it was a big deal. Why did it matter who my friends were and what people I chose to be connected to? If I liked them and they made me laugh, wasn’t that the most important thing?

But my father and other mature adults who cared about me knew I could not reach my full potential with the wrong people connected to me.

No matter how badly I wanted to hang around them and keep them as a part of my circle, they weren’t good for me.

Still today, my Heavenly Father regulates my connections, associations and relationships. He knows both who and what is best for me, despite how I feel about it.

This is true for you as well, that is, if you are yielded to the Father’s will in the way you should be.

When God has His hand on your life, you cannot be attached to everything or just anyone. Some people and situations will hold you back from reaching your destiny. They become dead weight, hindrances and distractions from your goal of attaining all God has for you.

Sometimes, you love them with all your heart and want so desperately to forge an unbreakable bond, but God still says no. You may even feel deeply connected to a specific situation, position or place. Though it feels like “home” in terms of how comfortable you are there, the Lord will still forbid you to stay.

You might not want to hear it, face it, or accept it, but still, God will say, “Release them. Let them go. I have more for you. They are not the one. They cannot go where you are going. You cannot stay here.”

Even if it hurts, obey the Lord.

Friend, God cannot release some things to you until He releases some things from you. Everyone cannot go where you are going. You cannot stay in the same place and progress. Seasons must change.

To help you accept the renovations God is doing in your life, the transitions He is taking you through, and the separations He is mandating, I’m stirring what Abram said to Lot in Genesis 13:9 NIV in order to avoid ugly feuds, unnecessary controversy and drama.

When you drink down the contents of your cup, you will be reminded once again that everyone cannot go where you are going. In some cases, it is better to say goodbye to them and move forward with your destiny, just as Abram had to do with his nephew Lot.

Abram, who would become Abraham, the Father of many nations, saw the bigger picture. God wants you to do the same, so you can be obedient to His call on your life and experience the best He has to offer you.

He’s setting you apart for a reason. Don’t let anything or anyone stand in the way.

If you say you forgive, then let GO and let God!