God is about to get you out 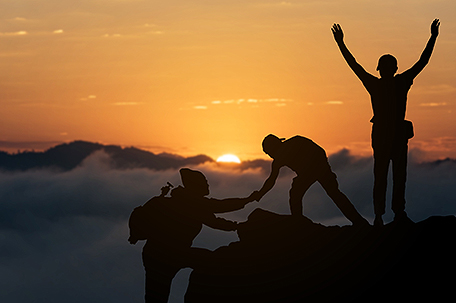 My husband Kenya and I laughed so hard this weekend.

This past Saturday, we hopped into the car and drove over an hour away so I could fulfill a ministry engagement in Rochester, New York. The only problem waswhen we pulled up to the church, it was locked. Not a single car was in the parking lot. Not another soul, other than us, was anywhere around.

Before arriving, I felt like something was off. I was told by my staff that the event organizer wasn’t replying for a few days. He was no longer responding to attempts made to contact him via email or phone.

Because of this lack of communication, I sensed something wasn’t right.

“We’re going to get there and nobody’s going to be there,” I told Kenya. But, because I had given my word that I would show up, I wanted to have integrity. Hubby reasoned that, there was a small chance that this person had gotten busy and was unable to respond.

So it was settled. We were going on a brief road trip.

And although I couldn’t get rid of that nagging feeling that told me in advance, that what ultimately did happen, would happen, I tried to be optimistic.

When my suspicions were confirmed, I don’t know why the whole ordeal was funny to me. We had wasted time and gas, and yet, I laughed until I cried tears in the car on our way back.

That thing tickled me!

While it was all happening, I just so happened to be recording footage for my blog on my YouTube channel. So you can actually see the whole saga unfold in the video fittingly titled, “We’ve been stood up!”

Kenya, unlike me, was totally shocked that we were the only ones that showed up.

Even though things didn’t work out that day (and we still have yet to get answers), we made the most of it. Afterward, we went to Tim Horton’s, had warm beverages and a snack, and made a midday date out of it.

Hey, there’s the silver lining in the cloud, right?

It all worked out in the end. It turned out to be a beautiful day of fun and quality time with hubby.

Saturday, being alone outside the church and getting “stood up,” as I told you, made us laugh heartily. But, for the prophet Jeremiah, being alone was anything but funny — especially because he was all by himself in a deep, dark, muddy pit.

Here’s a quick overview leading up to the preacher’s stint in a pit.

The judgment of Israel came because they willfully sinned against Yahweh. They were disobedient and unrepentant despite numerous warnings. So God judged them and determined that the enemy would plunder them.

This was horrible news — obviously.

And when Jeremiah told the rebellious people this, they had no desire to hear it. To make matters worse, He instructed them, as God directed him to, to surrender to enemy forces. That was the only way to spare their lives.

Giving advice to them to voluntarily give themselves up to the Babylonians didn’t play well. They thought, Surrender? Are you kidding me? We will never wave the white flag and let the enemy take us!

After sharing these divine, albeit highly controversial directives, Jeremiah was viewed as a traitor, liar and foe, worthy of nothing more than mocking, scorning, persecution, and even death.

In Jeremiah 38, we see that, when four of King Zedekiah’s top officials heard what the prophet had been saying, they were angry. They felt he was unwisely advising God’s people. But Jeremiah’s words weren’t unwise, though they seemed so. He was only relaying the words of our all wise, all-knowing, only true and living God.

In verse 4, in the Contemporary English Bible, these men told the king, “This man must be put to death! By saying such things, he is discouraging the few remaining troops left in the city, as well as all the people. This man doesn’t seek their welfare but their ruin!”

The king responded, “He’s in your hands,” permitting the officials to dole out a punishment for Jeremiah they viewed as befitting of his perceived crime.

Here’s what they came up with: they lowered the prophet down into a pit, within the prison quarters, by ropes. The Bible says, there was no water in there, only mud, and Jeremiah began to sink into the mud.

You may be down now. But, already, God has set a plan in motion to set you free. Get ready for your release!

Here Jeremiah was, doing the work of the Lord, sharing the message God gave him, only to be left stuck in the mud — literally. He was abandoned. It was dark, lonely and probably quite scary. With no food, water, light and no indication that anyone would return to rescue him, it looked like Jeremiah would stay stuck in the mud until he died.

God had a plan.

The Lord moved on the heart of an Ethiopian man — a Cushite — named Ebed-melech to campaign for Jeremiah. He went to King Zedekiah and vouched for this man of God. He said that what was being done to this servant of the Lord was an injustice.

In verse 9, Ebed-melech interceded on behalf of Jeremiah. He cried out to the king, “My master the king, these men have made a terrible mistake in treating the prophet Jeremiah the way they have; they have thrown him into the cistern where he will die of starvation, for there’s no bread left in the city.”

By God’s grace, King Zedekiah gave Ebed-melech permission to take thirty men and go fetch Jeremiah. He received authorization to pull him out of that pit.

So the men returned to the palace, went to an underground supply room, and found some old rags and scraps of clothing. Ebed-melech lowered them down into the pit by the ropes and called out to Jeremiah.

Hearing this man’s voice shouting his name must have sounded like music to Jeremiah’s ears! Suddenly, s beckoning interrupted the silence. The day had come when God used Ebed-melech to pull Jeremiah out of that pit.

He told Jeremiah, “Put these old rags and scraps of clothing under your arms and hold on to the ropes.” When Jeremiah did it, the word of God says, they pulled him up.

Friend, just as Jeremiah had someone interceding for him, so do we.

Our intercessor is Jesus. He advocates for us. He pleads on our behalf. When Satan rushes in to destroy us, Christ, our risen Savior, combats his plan of attack and rescues us.

Today, if you find yourself stuck in a pit of life, I’ve got good news for you: God is about to get you out.

Jeremiah’s rescuer, Ebed-melech’s name means “servant of the king.” What he did for the prophet was on behalf of the one in charge because he served at the pleasure of King Zedekiah.

An earthly king commanded his servant to pull Jeremiah out of the pit. In your case, a Heavenly King, the King of Kings and Lord of Lords, who has command and authority over everyone, and everything, has sent out a decree.

He has ordained that you come out of this pit.

Right now, He is causing your circumstances to align with His will; He is causing others to bless you; He is causing all things to work for your good. This pit cannot hold you. This attack will not work on you. The limited power of the opposition is no match for the limitless power of the One who advocates for you.

God has ordered your release from the pit.

Get excited, you’re coming up and out. There’s a breakthrough with your name on it. No more being confined to this dark, low place, with no sign of deliverance. Today, hear God’s voice. Just as Ebed-melech called out to Jeremiah, God is calling out out to you.

He’s saying, rise up! It’s time to step out of the old and into a new season.

All you may have is some ropes and old rags, but you’ve got just enough to get you out. When Paul and others were shipwrecked, all they had left to hold onto was debris and broken pieces from the ship. Despite the wreckage and everything they lost, they had enough left to safely make it to shore (Acts 27:44).

I know it doesn’t look good right now, but don’t worry. You’ve got enough to make it. You’re coming out of this. You may have lost some stuff. Everything may not be in order. You don’t see your way clearly. The road may be dark and dreary.

God is about to get you out.

To assure you that His word is true and that what He says will happen, I’m stirring Psalm 33:9 in the Contemporary Standard Bible translation into your cup of inspiration, which says, “For he spoke, and it came into being; he commanded, and it came into existence.”

As you drink down the contents of your cup, know that, because God has decreed your release, what He has ordained, spoke and commanded must happen. Your breakthrough is about to manifest, just because He said it.