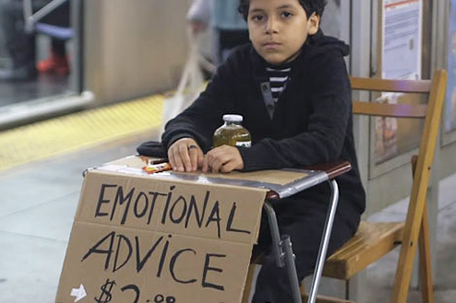 Ciro Ortiz, a sixth-grader from New York City, has found business success helping stressed-out New York subway-goers. For just $2, passerersby in need of some advice or encouragement can stop and have a 5-minute consultation with him. And so far, the idea is a very profitable one!

How he came up with the idea

Ciro, who was a victim of bullying in the past, says he was sitting around watching TV one day when he came up with the idea to be a counselor – despite his young age. He says he figured there were a lot of people like him that could use some help, so he decided to do something about it.

He told his parents, “I think I’m wise enough to give good advice!” And they agreed to let him test out his idea.

How he works it

Because he’s young ang still in school, Ciro is only able to work for two hours every Sunday (usually 12noon to 2PM or 2PM to 4PM). During these times, he goes to the Bedford L-train subway platform in Brooklyn, sets up his table and sign which reads “Emotional Advice For $2”, and he waits for people to approach.

When they approach him, he listens to their problems regarding work, relationships, and other general issues in life. On average, he makes about $50 a week – quite a bit of money for an 11-year old.

He says that his first day out on the platform was nerve-wracking, but he quickly got over it because it was an instant hit. Many passerersby were immediately interested in his services. He told UpWorthy.com, “I didn’t know if people were going to stare or laugh at me… [but they] saw that I was taking it seriously.”

Now his clients include men, women, and even police officers.

Ciro is not greedy. He strongly believes in helping the community and uses all of his profits to help children at his school who can’t afford to buy lunch or snacks.

He says his friends don’t quite get it, and that they don’t really understand what he’s doing or why. “But that’s ok,” he says.

He just cares about helping people. “Everyone needs help sometimes,” he says. “You can’t get through life without help.”

What a huge inspiration he is for all entrepreneurs – both young and old alike.

Teenager paid off college before he even started by selling newspapers