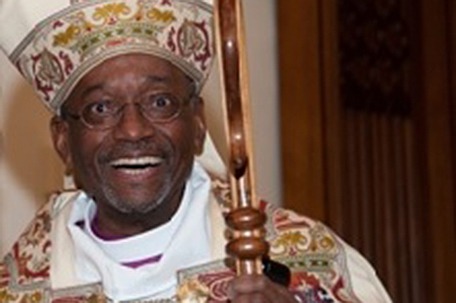 SALT LAKE CITY — The Episcopal Church has elected its first African American presiding bishop, choosing Bishop Michael Curry of North Carolina during the denomination’s national assembly Saturday. He will now lead a nearly 1.9 million-member denomination known for its history as the faith home of many of the U.S. presidents.

The New York-based Episcopal Church is the U.S. body of the Anglican Communion, an 80-million member worldwide fellowship of churches with roots in the Church of England.

Curry was elected in a vote by bishops at the Episcopal General Convention, the top legislative body of the church. Curry won in a landslide, earning 121 votes. The other three candidates had 21 votes or less. The decision was affirmed on a vote of 800-12 by the House of Deputies.

Curry will succeed Presiding Bishop Katharine Jefferts Schori, who will complete her nine-year term on Nov. 1. She was the first female presiding bishop and the first woman to lead an Anglican national church.

Curry, 62, has been bishop of North Carolina since 2000. He is known for his emphasis on evangelism, public service and social justice.

“This is beautiful,” said Norberto “Bert” Jones, 65, a lay deputy and African American. “God works awesome wonders, man. We’re getting to that point of understanding that it’s not about color and culture, but what you bring to the table.”

The Episcopal Church has been trying to confront its history of racism. The church has asked dioceses to research their links to slavery because many Episcopalians were slaveholders whose donations were used to build churches, cathedrals and schools. In 2008, Jefferts Schori held a national service of repentance to apologize for the church’s complicity with slavery, segregation and racism.

Curry takes charge at a time when fewer Americans are formally affiliating with a particular religious group, contributing to steady membership declines in the Episcopal Church and other liberal Protestant groups.

Membership in the Episcopal Church has dropped by 18 percent over the last decade.

Next week, the convention will vote on eliminating gender-specific language from church laws on marriage so religious weddings can also be performed for same-sex couples. Clergy could decline to perform the ceremonies.