Enough! It’s your time of release 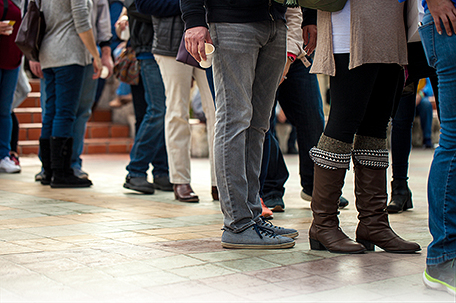 “Oh no, that’s still cold,” I said, frowning, with an unevenly heated mouthful of leftovers on my tongue.

Kyla and Kaiah, our teen daughters, laughed at me.

“You always do that, Mom,” they said, which is totally true.

When I’m hungry, I try to rush the heating process when warming up leftovers. Hunger is a powerful thing. Esau sold his birthright to his brother Jacob for a bowl of stew (Genesis 25:29-34).

Somehow, I let my empty, growling stomach lie to me over and over again. It consistently convinces me that skimming off a minute or two won’t make much of a difference. And each time, without fail, the fruit of my impatience is immediately apparent. My prize is a forkful or spoonful of half-cold food to chomp on as a reminder that I’ve been duped. I should have waited longer.

We want what we want, when we want it.

And yet, there isn’t a single person in the world that knows what it is to have their preferred timetable honored every day. They have to wait in lines, sit in traffic jams, get stuck on airport runways, deal with late deliveries, and wait longer than their ideal amount of time to be served at restaurants.

Delays are unavoidable—in the natural and the spiritual.

In Daniel 10, we see what a spiritual delay looks like.

The Bible says Daniel was in mourning and was praying to God for understanding. For 21 days, he fasted, didn’t groom himself and sought the Lord earnestly. Finally, in a vision, after three weeks of travailing, a divine being showed up and told Daniel something that still fascinates me to this day.

In Daniel 10:12, he said, “…from the first day that you set your heart to understand, and to humble yourself before your God, your words were heard; and I have come because of your words.”

Though the response to Daniel’s prayer was immediate, verse 13 explains, “But the prince of the kingdom of Persia withstood me twenty-one days; and behold, Michael, one of the chief princes, came to help me, for I had been left alone there with the kings of Persia.”

Here in scripture, we are getting a glimpse into the realm of the unseen and observing spiritual forces at work. The “prince of the kingdom of Persia” was not a physical entity. This was a description of spiritual opposition delaying Daniel’s divine answer.

But the delay came to an end. The set time arrived for God to break through the opposition of the forces of darkness.

We all have a set time.

In the meantime, we have to know there is a war going on in the Heavenly realm. The enemy doesn’t want us to trust God and cling to faith. He’s fighting for our very souls. Ephesians 6:12 tells us: “For our struggle is not against flesh and blood, but against the rulers, against the authorities, against the powers of this dark world and against the spiritual forces of evil in the heavenly realms.”

Friend, the unseen realm of the spirit impacts the seen realm of the natural. We are in the midst of a battle and Satan is always on the prowl. Yet, both you and I have been given authority.

2 Corinthians 10:4 says “The weapons we fight with are not the weapons of the world. On the contrary, they have divine power to demolish strongholds.”

We have the power of the Holy Ghost dwelling within us. As we pray and seek God’s face, He wages war on our behalf. Though you may not see the actual spiritual forces working against you, you can see the impact of those forces in your life. Right now, the enemy may be attacking you in various ways. Know that he will do whatever he can to oppose and hinder your destiny.

He can even hold up your divine release for a season.

But his time is always limited.

Daniel’s vision serves as good news for us. It is a reminder that, while God may permit the enemy to delay some things for a moment, ultimately, what God has for you cannot be denied. Again, Satan’s power is limited to what God allows.

For somebody reading this, God isn’t allowing the enemy any more wiggle room. His time is up. Your season of delay is over and your time of release is here.

You’ve been waiting for God to shift things in your favor. You didn’t give up. You wouldn’t back down. Satan tried to distract you, but you didn’t lose focus. You didn’t abandon your faith. It was hard. It got frustrating sometimes. Deep down, you could hardly believe God allowed the trial to last so long. It was unfathomable that you had to wait for such an extended period.

You wondered, when will He move for me? When will it be my turn? How much longer? What’s the hold-up? You were praying, praising, anticipating and being positive. You did all you could.

Now God is about to do what you couldn’t.

The season of delay has expired. Your time of release has arrived!

The delay, for you, is over. The Lord, by His authority, has declared it to be so.

Do you remember when the Roman Governor Pontius Pilate told Jesus he had authority to crucify him in John 19? In verse 11, Jesus said, “You would have no authority over me at all unless it had been given you from above.”

That word authority used by Jesus in the Greek language is “exousia,” meaning the power of judicial decision or the power to decide against one.

In other words, Jesus told that high-ranking government official that he didn’t have the power to determine the fate of the son of God, except that which was granted by the Father. Though Christ submitted Himself to death on the cross, He knew that it was the will of God, and not the power of man, that determined the outcome.

The same is true in our lives.

The enemy can’t just come in and ride roughshod over us. He has to get a permission slip signed by God before he gains access to our lives.

But the good news is, delay never meant denial. At times, it felt like it did, but God knew all along His will would be done. He’s had Satan on a very short leash. And right now, the Lord is yanking the enemy by the neck and demanding that he get back, loose you, and step out of the way of the move of God.

Like it or not, our chief adversary must be subject to the Father.

Ultimately, the test was building your character. The process was good for you, though it felt awful to you. The wait developed the fruit of the spirit within you. What the devil tried has failed.  You passed your test. Now God is saying, enough! It’s your time of release

You’re going to get everything God has for you. The delay has ended. Your breakthrough is here. The enemy is defeated.

To remind you of this truth, I’m stirring the first half of Isaiah 54:11 ESV into your cup of inspiration, which says, “no weapon that is fashioned against you shall succeed.”

As you drink down the contents of your cup, in this new season of release, no weapon, no delay, no attack, no opposition can stop the manifestation of the blessings God has set aside for you.