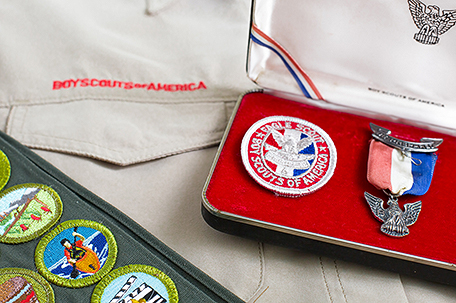 On December 19, 2017 Enon Tabernacle Baptist Church host the Cradle of Liberty Ceremony celebrating D’avon Kasir Byrd as he ascends to the rank of Eagle Scout, which is the highest ranking a scout can achieve. He will also become a “One-Percenter” because there are only five

Black males that have achieved this rank, D’avon will become number six.

According to Bryan Wendell (Eagle Scout and senior editor of Boys’ Life, Scouting and Eagles’ Call), there are currently 2,429,979 Eagle Scouts since the award was first presented in 1912 and only four percent of all scouts reach that status.

D’avon Kasir Byrd is academically talented, an Enon member and a Roman Catholic graduate who now attends Morgan State University. He has been a boy scout since he was 7 years old and has worked hard to become an Eagle Scout as a memorial to his mother, who died at the age of 22 years.

The Eagle Scout Cradle of Liberty Ceremony, will be held in the Sanctuary at Enon Tabernacle Baptist Church on Tuesday December 19, at 7:00 pm.