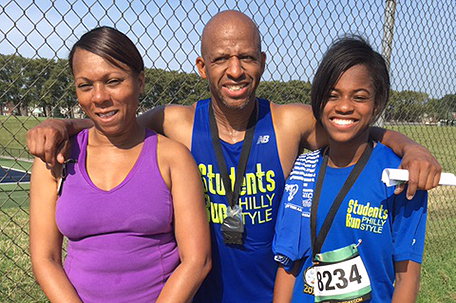 ABOVE PHOTO:  The Elam family (Rodney, his daughter Shelby and wife Kim) were participants in the Walk/Run.  (Photo courtesy: Arlene Edmonds)

The Center In The Park and the Wissahickon Boys and Girl Club got a shot in the financial arm thanks to the effort of the congregation of Enon Tabernacle Baptist Church.

Thanks to two fundraisers held by the church last weekend — the Fit For Eternity Walk/Run and the Northwest Community Fest — The Center In The Park, a community center for active seniors and the Wissahickon Boys and Girls Club will each get $10,000 checks to help their programs.

Despite the heat, more than 700 people registered to participate in the 12th Annual Fit for Eternity Walk/Run, according to the Rev. Leroy Miles, Enon’s Associate Minister of Pastoral Care.

The participants began running (or walking) on the grounds of Enon West in West Germantown at 5:30 AM and ended at the Enon East campus in East Mount Airy. 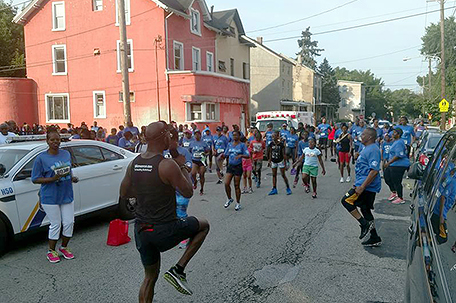 “We have taken the traditional old church concept of when a Baptist church grew and moved, they walked from the old church to the new one,” he said. “We have a new twist on that by combining that idea with fundraising.

Students Run Philly Style was one of the larger contingents. It’s something that club members look forward to, said Kelly Favreau, the group’s run leader. 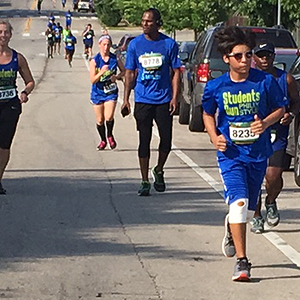 “Even though it is hot, we had 95 kids sign up for this race,” Favreau said. “This is our fourth or fifth time running in this event. We have mostly 7th graders who like to run in this. They love the race, and are motivated by the Chick-fil-A and the blue Gatorade as much as raising the money. The kids just love it.”

The Elam family was also among the runners. Rodney Elam and his 16-year old daughter, Chelby, ran the full five-mile trek from Germantown to Mount Airy while Kim, Rodney’s wife and Chelby’s mother, opted to take the two-mile track and ending up at Enon with her family.

For most of the family, it was a good time.

“Though it was hot and humid I feel good running for this cause,” Rodney Elam said. “We are a family that believes in being healthy and fit, so it was mainly inspiring to a church sponsor something like this since we already have a healthy lifestyle.”

But while she enjoyed the chance to hang with her friends, Chelby, a student at the Science Leadership Academy, wasn’t totally happy with the experience.

“This was my first time and the weather was terrible,” Chelby said. “I like trying to keep the (record) time.” 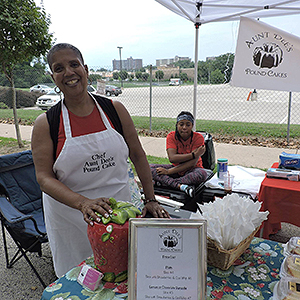 A vendor selling their goods and ‘goodies’ at the Northwest Community Fair. (Photo courtesy: ENON Tabernacle)

The run/walk benefitted Center In The Park, which was chosen because of its work regarding an issue that’s impacted many in Enon’s congregation, Rev. Miles said.

“The reason we chose Center in the Park this year is because they have programs that address diabetes,” he said. “We know that many in our community, including our church community are touched by diabetes or has a family member who is.”

But the run wasn’t the last of the church’s charity efforts that day. 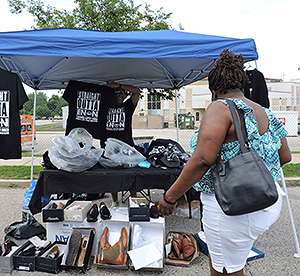 A vendor selling their goods and ‘goodies’ at the Northwest Community Fair. (Photo courtesy: ENON Tabernacle)

Among those present were families who attend the Wissahickon Boys and Girls clubs, Enon members, and those from the surrounding community.

Christine Greene of Germantown brought her niece and two nephews to the festival. She praised Enon, where she occasionally attends services, for finding a fun way to help young people.

“I wish every church had this type of event every month during the warm weather. I think this is the ideal way for Christians to raise monies for a children’s programs,” Greene said.