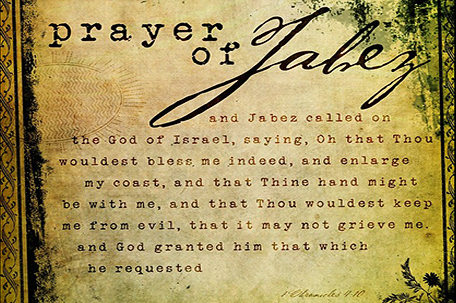 1 Chronicles 4:9-10: “And Jabez was more honourable than his brethren: and his mother called his name Jabez, saying, Because I bare him with sorrow. And Jabez called on the God of Israel, saying, Oh that thou wouldest bless me indeed, and enlarge my coast, and that thine hand might be with me, and that thou wouldest keep me from evil, that it may not grieve me! And God granted him that which he requested.”

Since my youth, my aunt has always had a direct impact on my spiritual life, along with my mother and another aunt.  I have to say that as a young person I was annoyed with the constant praying and the forced regurgitation of various scriptures and songs. My aunt would “test” us (the children) upon her visit.  Today, I think back fondly of how these things shaped me.  As a woman, I now eat the teachings of these women like a  starving person, and am thankful for the nutrition.  My introduction to the prayer of Jabez by this same aunt, now a minister, is powerful and perception changing prayer.

The most remarkable person in this chapter is Jabez. We are not told upon what account Jabez was more honorable than his brethren were; but we find that he was a praying man. The way to be truly great is to seek to do God’s will, and to pray earnestly. Here is the prayer he made. Jabez prayed to the living and true God, who alone can hear and answer prayer; and, in prayer he regarded him as a God in covenant with his people.  “The effectual fervent prayer of a righteous man availeth much.” James 5:16 b.  “Pray without ceasing.” 1 Thessalonians 5:17 urges us as believers.  Jabez shows us that the cornerstone of our personal relationship with God begins with humbling ourselves in prayer.

Jabez prayed for four things: 1. Bless him; 2. Help him in his work; 3. Be with him all the time and in all of his activities; and 4. Keep him from evil. The last sentence of this verse is “And God granted his request.”  Let us look at the 4 aspects of Jabez’s prayer.

“For thou, LORD, wilt bless the righteous; with favour wilt thou compass him as with a shield.”  Psalm 5:12 Jabez was in right standing with God in that he was an honored man.  He understood and expected the full favour of God in his life.  Daily we should see that we are in need of God blessing indeed.  Without the manifold blessings of God, we would not be able to make it.  Well, let me speak for myself here.  I need to be blessed indeed!  Sometimes it is not a financial blessing; sometimes we need our way to be a blessed path.  “Oh, God that you would even think to look down from your throne and bless me.  Oh, God you are so mighty.  Oh God you knew from my mother’s womb and called before the foundation of the earth that I would serve you.”  Jabez fully understood the awesomeness of the God he served.  Do we still understand that the God Jabez cried out to and humbly submitted his request to is still the same God?  He is the same yesterday, today, and evermore.

“He will bless them that fear the LORD, both small and great.”  Psalm 115:13   I hear the hymn say, “What a mighty God we serve…angels bow before Him, heaven and earth adore Him.  What a mighty God we serve” God is mighty to bless indeed.  Indeed, means certainly, without a doubt.  We must know that the Lord will certainly bless us.  That certainness must come from a place of faith.  “Now unto him that is able to do exceeding abundantly above all that we ask or think, according to the power that worketh in us,…” Ephesians 3:20  There is an inexhaustible fullness of grace and mercy in God, which the prayers of all the saints can never wear out. Whatever we may ask, or think to ask, still God is still able to do more, abundantly more, exceedingly abundantly more. Open your mouth wide; still He has every ability to fill it.   In our applications to God, we should encourage our faith by considering of His all-sufficiency and almighty power.

“…According to the power which worketh in us.”  He is in us and the power is in us! As if he had said, we have already had a proof of this power of God, in what he has produced in us and done for us, having quickened us by his grace, and changed us to Himself. The power that still works for the saints is according to that power that He has given us. Wherever God gives of His fullness, He gives to experience His power.

Well, I did not expect to stay in the beginning of Jabez’s prayer, but apparently, there is a lot to be said in looking deeper into the prayer.  Next week let us continue.  I want to leave us all in prayer…”Lord, God we worship you now.  You are worthy to be praised, God.  Thank you for this time that we can come together to read and enjoy just some of what your word may be saying to us corporately and individually.  God, you know that each of us desires to be blessed indeed in different ways.  We acknowledge that you are more than able to do it Lord.  Bless our going out and our coming in.  Thank you Lord for we count it as done, In Jesus name, Amen.”