Don’t be moved by uncertainty 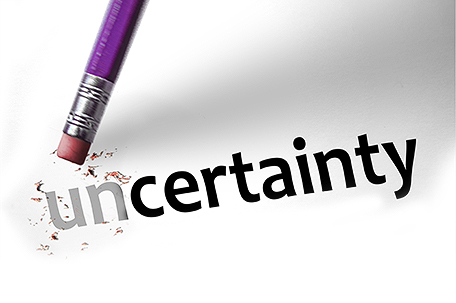 At the time, I was hunched over, looking through a briefcase full of files, fully engaged in my reorganization project. I turned around to see what she was talking about when I noticed something familiar in her hand.

Over the weekend, I decided to free up some space. I wanted to rid the Hobbs home of unnecessary storage. It was a big project and the soreness in my body today tells me how many boxes I moved around.

In the middle of scanning filed-away data and making a firm determination about what was definitely going, and what was staying, Kyla’s voice broke my concentration.

What she had in her hand got my attention.

It was a large manila envelope with green trim.

I quickly recognized it.

“This is the letter from my doctor saying two lumps they found in my breast were benign,” I explained.

In 2011, months after my mother finished her chemotherapy and radiation treatment, and was given a clean bill of health, I discovered a hard, painless lump in my left breast.

Because of my family history, the doctor was extra cautious and set me up for a mammogram right away.

The radiologist’s films showed what appeared to be early stage Ductal Carcinoma—one of the most common forms of breast cancer.

I had not one, but two lumps.

I was sent to the best breast specialist in our city.

The day he told me with a smile, “You can relax. It’s not cancer,” I smiled back and felt thankful.

Before my good report came, though, I had to believe God and know that everything would be alright.

It was difficult, at moments, to remain optimistic when doctors weren’t even sure I should be.

Uncertainty is uncomfortable. It can be frightening and unsettling.

Whether the issue is health related or not, we all want to know everything will be okay. We long for clear insight into what God will do next. We desperately desire clarity and certainty about the outcomes of life.

Nevertheless, in every believer’s life, there will be a meantime or between-time season. The answers won’t come right away.

There will be some kind of uphill faith climb.

I like to compare it to traveling to the top of a hilly road. The incline makes it impossible to see over it. Nothing is visible ahead except the hill left to climb.

Are you there right now? If so, don’t let that worry you. Don’t let uncertainty move you.

You might not have all the details of God’s plan, but there is something you can know for sure: whatever happens, the Lord will cause all things to work together for your good!

You may not know how things will turn out, but know that it will all work out for your good.

So how do you handle your meantime?

Adopt the right mindset, like the Shunammite woman in 2 Kings 4:8-37. In dire circumstances, when her son became suddenly ill and died, she didn’t panic or lose hope.

Instead, she sought out Elisha, the prophet of God, with full assurance that the Lord was able to revive her son. In verse 23, even when her husband asked why she was looking for the man of God, she did not answer her spouse in a panic. She was not hysterical.

Her son was dead and she was calm?

This faith-filled woman said three words in the middle of a negative crisis: it is well.

She declared that it was already alright during a serious shakeup in her world.

She spoke victory while her only son, a child of promise, who had been prophesied by Elisha, lay lifeless.

It appears that she understood something fundamental: uncertain times call for certain faith. When you know the Lord is faithful to keep His word, you can face trials calmly.

This woman believed God, no matter what.

Her inspiring confidence in God was unwavering. So God used Elisha to perform the miracle of returning the boy back to his previously healthy state.

Our Heavenly Father responded to her faith.

Friend, He wants you to take cues from her reaction during whatever test you’re presently going through. You have to walk by faith, not by sight.

In order to help you remain calm in affliction and cling to faith and hope in God, I’m stirring the words of the Shunammite woman into your cup of inspiration taken from 2 Kings 4:23: “And she said, ‘It is well.’”

When you drink down the contents of your cup today, you will be reminded that, even before you see a turnaround, you can confidently declare it.

It is worked out.

It is turned around.

Open your mouth and speak the word.