A Cup of Inspiration: Stop focusing on what you see… 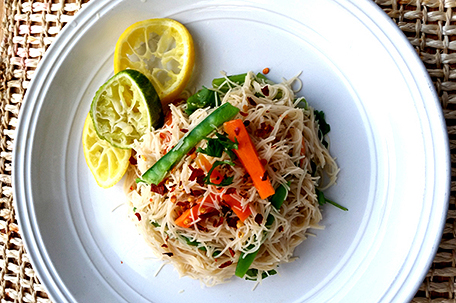 ABOVE PHOTO:  I even took a picture of it to show you how pleasing it was to the eye.

When I tell you that yesterday’s dinner was nasty, I mean it was disgusting!

The Hobbs family did, at least, have an enjoyable time making it, though.

All six of us sat around the table cracking up about how awful things turned out. But we put forth a valiant effort.

Recently, I’ve been having some digestive issues.

I prayed about what was going on in my body and went to see my doctor. Long story short, thank God for His wisdom and guidance. We discovered that I needed to make some serious adjustments to my diet.

Since having my gall bladder removed after a massive attack more than 15 years ago, my system hasn’t been able to break down certain foods. My digestive system was virtually crippled, giving me major problems over the past several months.

I didn’t fully understand what was going on, but I’m thankful for the trouble I began having. It led me to investigate further and zone in on the problem, which can be eradicated with a whole foods, plant-based lifestyle.

Sometimes, God allows things to go wrong to help us get things right.

But that’s another lesson for another time.

Anyway, I’ve been eating lots of veggies, fruits, legumes, starches, whole grains, and cutting out meat and dairy. I get the protein and nutrients I need from fruits and vegetables.

I’ve been feeling lots better. The symptoms I was struggling with before, have disappeared. This natural path to wholeness is working.

The alternative, which I didn’t want, was taking drugs to treat my digestive problems, which could lead to some pretty nasty side effects.

Well, now that my eating habits have changed, the tricky thing is finding new ways to prepare dishes that don’t include the ingredients that give me trouble.

My sweet family has been incredibly helpful during this time. My husband Kenya has given the refrigerator an overhaul. It looks like the produce section in the supermarket. I’ve never consumed so many bananas, apples, oranges and other fruits in my whole life!

The children have also pitched in to help identify some recipes they think might be delicious from a vegan cookbook.

And this, my friend, is how Sunday’s epic disaster happened.

Our youngest daughter Kaiah, the recipe-picker, selected a dish she thought might be tasty. We all agreed, got together in the kitchen, pitched in and cooked it.

Although we each took note of the fact that we had never used any of these bad-smelling ingredients before, we tried to remain optimistic.

“This is going to be nasty. I can tell,” said our oldest son Kedar, who doesn’t often mince words.

The odor was a good indication that he may be right, but the rest of us tried to keep an open mind.

Once it was all done and plated, we prayed and dug in.

It was so offensive to my taste buds, I couldn’t contain my disgust. One-by-one, we broke down and admitted that it was grotesque.

We desperately wanted it to be good.

When Kenya finally put his fork down, shook his head and frowned, that meant we had a problem. Kenya will eat just about anything. If he doesn’t like it, it’s bad–really bad.

Ironically, it was such a pretty dish, but the combination of seasonings, as well as the special sauce that was poured over it, just did not work for our taste buds.

I even took a picture of it to show you how pleasing it was to the eye.

Man, if it had tasted half as good as it looked, it would have been wonderful.

The lesson? Things are not always the way they appear.

Just as something can look good and be bad, on the flip side, what seems bad isn’t necessarily that way.

I’m reminded of a story I’ve shared once before from Luke chapter 8:40-56.

In that passage of scripture, a 12 year girl, the daughter of a man named Jairus, was lying at the point of death.

Desperate for help, this distraught father threw himself down at Jesus’ feet, imploring the Savior to come to his house and heal her.

That’s when the woman with the issue of blood, who had been sick as long as Jairus’ daughter was alive, came seeking healing.

She interrupted Jairus’ moment, by touching the hem of Jesus’ garment and receiving her healing.

Meanwhile, the delay proved fatal for Jairus’ daughter. Someone from his house came and told the concerned dad, “Your daughter is dead; do not trouble the Teacher anymore.”

What a crushing blow. All seemed lost. It appeared hopeless. But God was about to turn a seemingly bad situation around for good.

In response to the news, Jesus told Jairus, “Do not fear; only believe, and she will be well.”

How could a dead girl ever be well? Her life was over—at least according to man’s assessment, which greatly differed from what the Master said.

Based on what people saw, they came to the conclusion that her life had ended permanently. They had pronounced death when God was speaking life.

When Jesus arrived at Jairus’ house, folks were mourning, wailing and bawling their eyes out over the tragic loss. When Jesus said she wasn’t dead, but only sleeping, they took a break from crying and started laughing.

They were thinking, “Is this guy out of his mind?”

Despite the skeptics assuming Jesus was misguided and crazy, He took the child by the hand, spoke to her, and told her to arise.

At His command, life returned to her lifeless body. It was a miracle!

That day, God showed Jairus that He is sovereign, all-knowing, all-powerful and able to bring hope to a seemingly hopeless situation.

From this, we learn that looks can be deceiving. During some seasons, it will look like you’re on the verge of a breakdown, when really, you’re on the cusp of a breakthrough.

Your situation might look bleak, but God is saying, stop focusing on what you see with your eyes and shift your attention to what I’ve said in My word.

God calls you victorious, more than a conqueror, favored and anointed. He assures you in Romans 8:28 that all things work together for your good, because you love Him and are called according to His purpose.

Quit focusing on what you see and listen to what He speaks.

When He speaks, despite how long that situation has appeared to be dead, life, restoration and great things will manifest, because He said it.

Just one word from the Lord changes everything!

When God speaks yokes are destroyed; shackles are loosed; chains fall off; sickness is expelled; the bonds of oppression are broken.

Psalm 107:20 KJV, which is what I’m stirring into your cup of inspiration, says, “He sent his word, and healed them, and delivered them from their destructions.”

As you drink down the contents of your cup, be reminded that God’s word—not your circumstances or man’s opinion—determines the outcome.

It’s Not Too Late