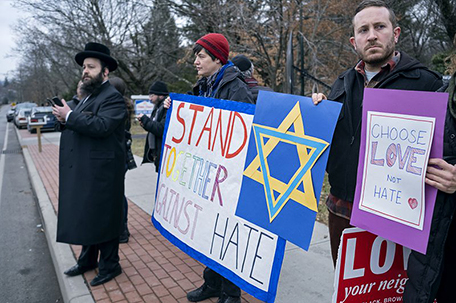 ABOVE PHOTO: Neighbors gather to show their support of the community near a rabbi’s residence in Monsey, N.Y., Sunday, Dec. 29, 2019, following a stabbing Saturday night during a Hanukkah celebration. (AP Photo/Craig Ruttle)

“We condemn in the strongest possible terms the anti-Semitic attack in Rabbi Chaim Rottenberg’s home in Monsey, New York, during the Jewish holiday of Hanukkah.

This surge in anti-Semitic attacks is a disturbing trend both here in the United States and abroad. We cannot tolerate these discriminatory, hateful, and cowardly acts. We stand with the victims in Monsey, their families, and the entire Jewish community- who have been victims of violent attacks during Hanukkah, a holiday that celebrates religious freedom.

Every individual in this country deserves to feel safe and worship without fear. It is this commitment to diversity that has made the United States a beacon of hope and a place of sanctuary for people around the world.

The Caucus will continue to stand united in fighting for liberty and justice for all.”