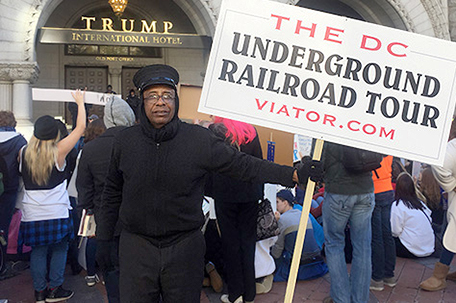 Washington, DC — “Breaking into the tour market of DC is not easy when you’re trying to get people to #seemoreofdc and truly enjoy what we have to offer here, and your information is about Black people,” says Donald Folden.

Folden via his company, Capital Buddy Tours, has just launched two new African American history tours in the city – The DC Underground Railroad Tour and The DC Black History Night Tour. He has teamed up with DC Historian, Hari Jones, as the tour guide.

Folden says his tours start at the Anacostia Metro Station in Southeast DC because he wants to show people they don’t have to be afraid to leave the downtown area. He continues, “We try to expose them to other vibrant areas of DC, which is why we use the hashtag #seemoreofdc. The new African American Museum is attracting a lot of people here, and this might just be the right time to offer these new experiences to show people that there’s more to DC than the Capitol and the Lincoln Memorial. I’m not under any kind of illusion about how difficult it is to start anything about black people in this city says Folden but somebody has to keep trying!”

The DC Black History Night Tour starts on December 5, 2016 at 6:30PM and takes guests into a local cemetery at night to show them where runaway slaves actually hid. Folden says that it’s the only tour that takes you to a cemetery in DC (because Arlington,Virginia is not in DC).

He continues, “I just want to be able to show young people that you can take information already around you, and organize it so you can make a living and by no means is this easy.”

To book a tour, visit one of the following links: