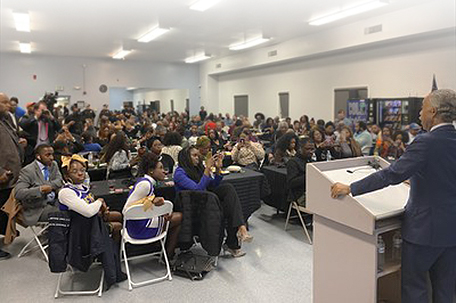 ABOVE PHOTO: Reverend Al Sharpton addresses a crowd of over 200 at Wilmington, Delaware’s Kingswood Community Center.

Sharpton vows, “I’m going to keep coming back to Delaware until diversity in this state’s justice system is no longer a pervasive issue.”

WILMINGTON, Del. — On February 24, civil rights activist the Rev. Al Sharpton and Rev. Christopher Bullock co-hosted a free dinner for Delaware residents in honor of Black History Month, emceed by local Pastor Dale Dennis II of Hoyt Memorial CME at the Kingswood Community Center in Wilmington. The event was sponsored by Citizens for a Pro-Business Delaware.

The pastors led a discussion on the lack of diversity on Delaware’s courts and its adverse effects on all of the state’s residents. The discussion, at the Kingswood Community Center in Wilmington, also focused on what can be done to “repair the institutional neglect of people of color in the Delaware,” as Reverend Sharpton stated in his first advocacy visit to the state in October.

The dinner came following the Delaware State Senate’s refusal to hear Sharpton on the issue of diversity in the state’s judicial system at a Chancery Court Chancellor’s nomination hearing. In the past several months, Reverend Sharpton has visited Delaware calling for progress on the issue and even penned a letter to leading law firm Skadden Arps calling for elite firms to do their part in advancing people of color in the legal industry.

“They thought I wasn’t going to come back,” Sharpton said. “But I’m going to keep coming back until this is not an issue. To say I was disappointed the State Senate would not even agree to hear testimony from myself on the matter of judicial diversity would be an understatement. But our voices cannot be silenced and I am excited to be joining my colleagues and fellow civil rights champions in the First State to celebrate Black History Month and rally around our cause: Delaware needs more black and brown judges and we need them now.”

SOURCE Citizens for a Pro-Business Delaware