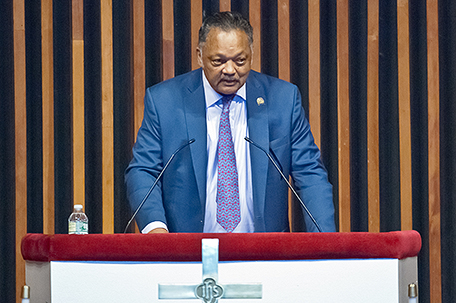 Although Jackson — in town for the recent Progressive Baptist National Convention (PNBC) — has visited the church on several occasions during his over five decades of activism, it was his first return visit in many years.

As the United States struggles through a challenging pre-midterm election season — complicated by foreign interference, voter purges, cynicism and an Executive Branch heaving under the weight of several criminal investigations — true leadership is as much on the ballot as any of the hundreds of candidates.

But while this is the case, it’s important to not allow the weight of this reality to outweigh the needs of a country that has plenty of them, according to the Rev. Jesse Jackson. From the moment he announced his campaign for president, Donald Trump has worked from a tired old script of racism that‘s included the Birther movement, vigilante justice against the Central Park Five and racially charged tweets attacking everyone from Rep. Maxine Waters to NFL players.

The time for allowing these distractions to keep our eyes off the prize has passed, Jackson said.

“It’s dark, but we’re no less responsible in the dark than in the light,” Jackson said. “In the times in which we live, we must not adjust [to the darkness]; we must fight back…what time is it? Is it dusk moving toward midnight, getting darker, or dawn moving toward daylight?

During a talk he gave at Bright Hope Baptist Church in North Philadelphia as part of last week’s Progressive National Baptist Convention, Jackson reminded his audience that the fight to maintain rights fought for long ago —-like, for example, the right to vote —-was still ongoing and had been joined by issues including mass incarceration, debt and a lack of affordable housing as a means of impeding the progress of the African-American community.

While these problems won’t be solved by voting alone, the road to solving them runs through the polls, Jackson said. 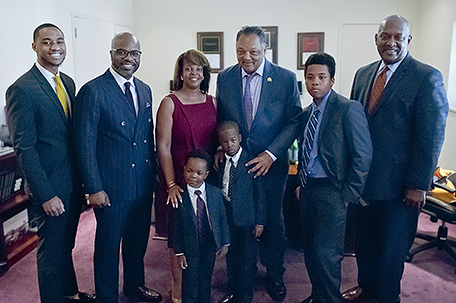 “Somebody sitting in church today is on food stamps but won’t vote…50 percent of us make less than $15 per hour, working every day, raising other people’s children, driving cabs, cutting grass, working in hospitals, and can’t make ends meet,” Jackson said.

Jackson pointed out the fact that 4 million African-Americans in the South are not registered to vote, and although 2 1/2 million are registered, they did not vote in the last major election.

“We have 93 days to go [until the midterm election],” Evans said as he joined in welcoming Rev. Jackson to the Bright Hope pulpit. “There’s a difference between fear and hope, and if you understand that, he, more than anyone, has talked about keeping hope alive. If you think and understand where we are today, which path will we choose, he has demonstrated the path. When you look at it, and think about the 93 days to go, you couldn’t have a better speaker today.”

In parting, Jackson charged the congregation to register to vote, check their registration to make sure it is current ahead of November’s election and to make sure to bring others to the polls that day. He also told them to remain vigilant, take nothing for granted and to keep fighting for the hard-earned civil rights gains that are currently being challenged.