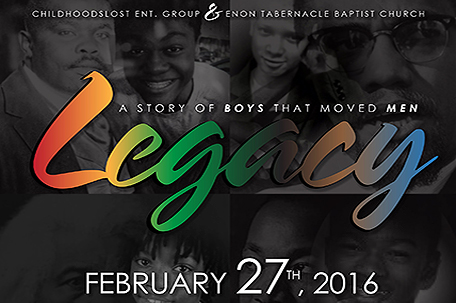 The Legacy play production débuted on October 25, 2015 for two fully housed shows at the African American Museum of Philadelphia. By popular demand; it goes on a local Philadelphia tour in observance for Black History Month.

Legacy is written by Karen Smith and directed by Bilal Islam.

Corey Sheppard, a character portrayed by Justin Booker a tenth grade student at Northeast High School is a teenager raised by a single parent in an urban housing apartment project. His lackadaisical attitude towards his education causes an argument between him and his mother whom he feels she’s too old to know what’s best for him. Corey feels that the school system is failing him, and as he falls asleep on the couch he experiences a reawakening ‘February Twilight Zone.’

During this rude awakening, Corey realizes all of the knowledge and sound advice that these African America Forefathers bestowed upon him to help him make better choices in life. The climax builds as the young leaders discuss the issues of racial profiling, police brutality and continued corruption in our government and how it still affects the African- American community.

If our great leaders were still alive, what would they have to say about these issues?

Let’s allow Legacy to resonate and empower a youth in knowing that they too can be great.

The local tour started on Feb. 12 at Southwest Leadership Academy Charter School and Feb. 19, John Story Jenks Academy of Arts and Science. The last day of the tour will be on February 27th at Enon Tabernacle Baptist Church in Mt. Airy section of Philadelphia.  A panel discussion takes place addressing how racial profiling and police brutality affects the African- American community. Admission is free to the public at all venues and is available for further bookings by contacting Lisa Hopkins @ 215 844-6098.