Bright Hope Baptist Church commits over $100,000 in support of memorial preserving the legacy of the Honorable William H. Gray III 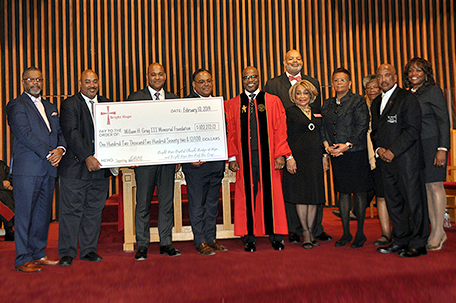 “For almost a century, the Gray family name has been synonymous with Bright Hope Baptist Church,” Rev. McKinney said. “It is only fitting that our church – which both molded and was molded by Reverend Gray III – would be one of the first entities to help build the economic foundation of this memorial. We are proud of Rev. Gray’s legacy of fighting for our communities both here and around the world, and we look forward to seeing that legacy memorialized so that future generations can learn its history and be inspired.”

Congressman William H. Gray III represented Pennsylvania’s 2nd Congressional District from 1979 to 1991. He was, and remains, the highest-ranking member of the Pennsylvania delegation to ever serve in Congress.

As a third-generation pastor at Philadelphia’s Bright Hope Baptist Church, and later president of the United Negro College Fund, Gray was a tireless advocate dedicated to improving the lives of disadvantaged communities living not only in but around the world.

“On behalf of the Gray family and the Gray Memorial Foundation, our deepest gratitude to Pastor McKinney and the entire Bright Hope community for this generous contribution,” said Justin Gray, chair of the William H. Gray III Memorial Foundation. “We feel incredibly fortunate that Amtrak’s 30th Street Station will soon carry the name of my late father, because this memorial will also honor the people who touched his life, and the lives he was able to touch – the thousands of United Negro College Fund scholarship recipients, the millions of Philadelphians who depend on public transit and public services, and the many activists who marched and organized for Nelson Mandela’s dream of a free Africa. This is our entire community’s legacy, and we thank Bright Hope for their leadership.”

After years of outreach and advocacy, the William H. Gray III Memorial Foundation has entered into formal discussions with Amtrak leadership to finalize the details of the memorial at 30th Street Station. Announcements on the results of those discussions are forthcoming.