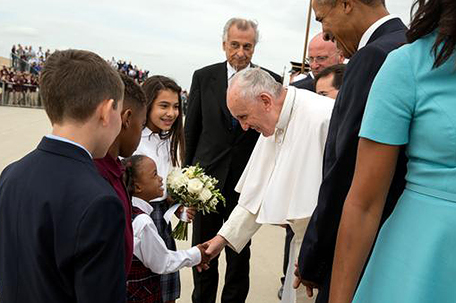 ABOVE PHOTO:  Young girl meets Pope during ceremony after his speech at the White House.  (Photo:  White House/Twitter)

The worldwide leader of the Catholic Church addressed a joint session of the Congress last Thursday and delivered a message that was seemingly pleasing to African Americans.

Pope Francis spoke to an audience of the U.S. House of Representatives and the U.S. Senate as well as representatives from the diplomatic corps and some members of the U.S. Supreme Court. Pope Francis, in his one-hour, 10-minute speech, focused on aiding the poor, accepting immigrants as human beings needing help and talked about Dr. Martin Luther King Jr. and the Civil Rights Movement to the delight of U.S. Rep. G.K. Butterfield (D-N.C.), chairman of the Congressional Black Caucus.

Butterfield, who is Baptist, said that the pope’s reference to the work of King and the 50th anniversary of the Selma to Montgomery march was appropriate because “those stories are instructive.”

Nearly 31 percent of the House and Senate consider themselves Catholics, compared with 22 percent of the general U.S. population according to the Pew Research Religion and Public Life Project. House Speaker John Boehner (R-Ohio) and House Democratic Leader Nancy Pelosi (Calif.) are Catholics along with U.S. Vice President Joe Biden (D).

CBC members who are Catholics are Reps. Charles Rangel (D-N.Y.) and Lacy Clay (D-Mo.). Clay said that he liked what his religious leader said.

“The Holy Father Pope Francis’ inspiring message challenged us to rise above our petty divisions to protect the planet, restore the dignity of workers, combat poverty and strive for peace and social justice,” Clay said. “He reminded us that all of us were once immigrants and he appealed to our greater capacity and moral obligation to put faith into action to advance human dignity and the common good.”

While the House chamber, where the pontiff spoke, was packed with visitors in the gallery, tens of thousands of people watched the event via Jumbotrons set up on the West Lawn of the U.S. Capitol and on the National Mall. Some people arrived as early as 5 a.m. to witness the pope’s address and to be in his presence.

Some African Americans, such as Gwendolyn Anderson, came from across the country to listen to the pope speak. As an attorney in Chicago who lived in Mississippi during the civil rights era, she said the pope’s reference to the historic movement pleased her.

“He was tremendous,” Anderson, who is Catholic, said. “He understood the struggle that Black people went through. I went to Tougaloo College and King was frequently on my college campus and I am glad that the pope mentioned Dr. King’s dream.”

D.C. Council member Brandon Todd (D-Ward 4) was among the hundreds who were on the upper terrace of the West Lawn. Todd said the pope’s message had a special meaning for him.

“The pope’s speech was very focused and people-centered,” Todd, an Episcopalian, said. “He encouraged us to do more to help the youth, the elderly and those of us who are most needy. I agree with him and that is why I ran for elected office.”

In his remarks, the pope said that politicians should “initiate process instead of occupying space.” When Todd, elected to the council in April heard that, he chuckled in agreement with the pontiff.

Todd was invited by D.C. Mayor Muriel Bowser (D) to attend the address. Bowser was in the House chamber where the pope spoke and has followed the pontiff throughout his schedule in the District.

Among the hundreds on the upper terrace with Todd was Republican presidential candidate Dr. Ben Carson. Carson said that he couldn’t understand some of what the pope said because of his sometime incomprehensible English, but supported the pope’s message in principle.

After his speech, the pope, along with the leaders of the U.S. Congress and Biden, appeared on the Speaker’s Balcony overlooking the West Lawn and the National Mall. The pontiff, in Spanish, said that he was delighted by the number of children who were present.

Samuel Merga, a junior at Archbishop Carroll High School in the District, said he was happy to be in the pope’s presence.

“I am interested in government and politics and I am religious,” Merga said. “I am not Catholic, but I did want to hear what he had to say.”

TD Jakes is stunned by the Pope’s sudden resignation