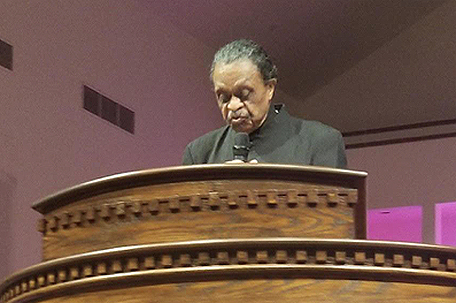 ABOVE PHOTO: Newly installed president of the Black Clergy of Philadelphia and Vicinity, Rev. Robert Collier, speaking during his installation service January 19, 2020 at Mount Airy Church of God In Christ.

For the first time in four years, there will be new leadership at the helm of the Black Clergy of Philadelphia and Vicinity.

Last Sunday at West Oak Lane’s Mount Airy Church of God In Christ,  the organization installed its new president, Rev. Robert Collier, pastor of the Galilee Baptist Church in Roxborough. He has served as the church’s pastor for 28 years.

Collier has been an active participant in the Black Clergy of Philadelphia and Vicinity for over 17 years, first joining under the presidency of Rev. Dr. Robert P. Shine.  He also has held several positions including assistant secretary, assistant treasurer, treasurer, third vice president, second vice president and most recently, first vice president.

Rev. Jay Broadnax, the outgoing president of the Black Clergy, praised the selection and believes the organization will be in good hands.

“Rev. Collier is a man whose time has come,” he said. “He has served the organization faithfully in multiple support roles. He has the spirit, integrity, determination and strategic vision to carry Black Clergy of Philadelphia and Vicinity to the next level in this season. I look forward to his leadership.”

Collier considers his new role the continuation of a life of service to God.

“I consider my greatest accomplishment in life to be called to serve on the battlefield for our Lord and Savior, Jesus Christ as an under-shepherd,” he said. “I’m excited to be the newly elected president of the Black Clergy of Philadelphia and Vicinity. I have a vision for Black Clergy of feeding the soul, enhancing the body and motivating the mind.”

Rev. Roman’s presence was especially humbling for him, Collier said.

“To have Rev. Dr. Gus Roman on hand to oversee and conduct the installation service was very special for me,” Collier said. “I am so glad that even with his still demanding schedule, he found time to be with us.”

Collier was also an associate minister at the Christian Memorial Mission in North Wales, Pennsylvania, and hosted their radio broadcast for over five years.

Collier was anxious to get to work in his new position.

“Under my leadership, the work  of the Black Clergy will remain the same; to encourage more people into following God’s word and seeking out a church home, lifting up the disadvantaged in our community, educating the masses about critical health issues, but also equally staying on top of concerns related to ensuring a more fair public school system for our youth, and always promoting voter registration and education and a balanced justice system for people of all nationalities and backgrounds,” he said.

Collier said he considers being a family man his second greatest accomplishment in life. He’s married to Rev. Maxcine Selby Collier, who is also an ordained minister. They are the proud parents of two sons, Rev. Robert Collier, Jr. and Damond C. Collier, and one grandson, Nahmir.

In 2020, The Black Clergy intends to work on a massive voter registration drive. The effort will focus on getting people registered to vote and prepare them to participate in the political process during this critical presidential election year. The voter registration drive will be a grassroots effort, church to church, congregation to congregation and out in the community.

The Black Clergy of Philadelphia and Vicinity, which represents about 75 pastors, was founded 38 years ago. Over the years, the organization has tackled a myriad of issues plaguing the African American community from reaching more youth and getting them connected to church and worship, the HIV/AIDS Crisis, to homelessness, affordable housing and gentrification, education reform, racial profiling, the criminal justice system and more.