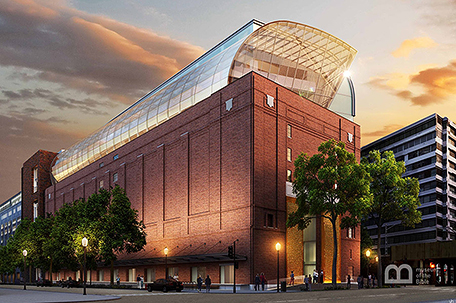 The new Museum of the Bible will give visitors a chance to learn more about a book that often goes misinterpreted.

Because Christianity, with 2.4 million adherents, is considered the world’s largest religion, the Bible plays a large part in how many people see the world.

But while a lot of people read it, and claim to have a working knowledge of it, how much do people around the world really know about the Bible? Where did it come from? How do similar religious texts like the Koran and the Torah connect to it?

Starting in 2017, you’ll be able to find the answers to just about every question you might have about the Bible and even a few you didn’t think to ask at the new Museum of the Bible in Washington, D.C.

The museum, which will be located near the National Mall and blocks away from the Capital Building, will house more than 400,000 square feet of artifacts, research space and exhibits designed to bring people to a closer understanding of the Bible, said Steven Bickley, Vice President of Marketing for the museum.

“The Bible is a book that has had more of an impact on Western Civilization than any other book,” Bickley said. “But there were no museums to tell its story. A lot of people don’t know its history and impact. The museum will cover these areas.”

In a presentation done during the recent World Meeting of Families, Cary Summers, president of the Museum, showed an enthusiastic audience an overview of what the museum will look like. The museum will be housed in the former Terminal Refrigerating and Warehousing Company building, which has been designated as an historic landmark.

The eight-story museum will include a lecture hall that seats 1,000, a ballroom that seats 500, the New Testament Theater, which seats 500 and will be a center for the performing arts, and a rooftop Biblical garden, Summers said.

It’ll feature five halls of interactive exhibits that focus on the impact, history and narrative of the Bible. If you’d like, you can even eat the food of the Bible while you’re at the museum, Bickley said.

During the recent World Meeting of Families, one of the museum’s traveling exhibits, Verbum Domini: God’s World Goes Out To The Nations, was on display at the Pennsylvania Convention Center. The display is a part of the Museum’s central collection, The Green Collection, which is owned by Steven Green, president of the craft store chain Hobby Lobby the museum’s chairman.

The Museum will also be home to other historic religious texts including the Torah, the Jewish holy book, and the Quran, the Muslim holy book.

The Museum of the Bible is scheduled to open in November 2017.

UP adds “The American Bible Challenge” to its lineup