Beverly Allen – A life journey of love and happiness 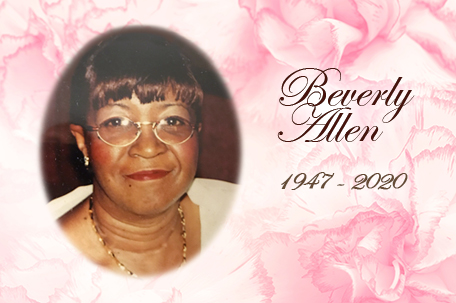 “If you are reading my story, the Ship of Zion has sailed and I’m now free of pain – Hallelujah!”

Affectionately called “Jean” by her children and family, and “Bev” by her close friends, Beverly was the second child born to the late Zebedee and Synda Allen on April 5, 1947. Reared in a loving Christian home, she was educated in the Philadelphia public school system, and made history as the first student president of John Wanamaker Junior High School in 1961.

Upon graduation, Beverly’s career ran the gamut, from working at Bee’s Delicatessen to Whitman Chocolate to Technitrol, where she desired to be an engineer. However, it was her love of children — particularly those with special needs —  that led her to the School District of Philadelphia in 1980 as a bus matron and classroom specialist for children with disabilities.

After working in the special education field at Henry H. Houston School, Aloysius L Fitzpatrick School and LeBrum School, Beverly received an offer to join the staff at Ben Franklin High School to be lead disciplinarian and head of the Junior ROTC program. She enjoyed working with the students there; more importantly, she especially delighted in preparing the seniors for prom, graduation and post-secondary education.

In 2011, she retired from the Philadelphia School District with a record of exemplary service and numerous accommodations.

Beverly was baptized at an early age at Morris Chapel Baptist Church under the leadership of Reverend James S. Hall Jr.

She was extremely active at Morris Chapel – in Sunday school, on the Junior Usher Board and as a Teen Bible Study Teacher. Later in life, she reconnected with Reverend Dr. James S. Hall, Jr. and attended Triumph Baptist Church.

A strong proponent of public education and a fierce advocate of human rights, Beverly was an active member of the Black Panther Party in the early 70s.

She was also active in the 17th Ward of the Democratic Party. Later, she relocated to the 37th Ward, 7th Division, and served as a Committeeperson for 30 years.

Beverly often cited several highlights of her life – the birth of her children and her first grandson, Tyrieke; unification with Ronald “Ronnie” Smith, the beloved friend, confidante and travel partner whom she embraced as her “soulmate,” and watching her children graduate from high school and college.

For over 30 years, Beverly and Ronnie were inseparable. With a quip of, “Let’s go Bev’!” in his baritone voice, Ronnie would sweep Beverly off on a travel venture or evening of entertainment. The two enjoyed vacations to the beach and attending plays and concerts.

Beverly was fond of the music of her classmate, Frankie Beverly, as well as The O’Jays and Marvin Gaye, to which she’d sing and dance into the night.

She enjoyed time with friends and instilling important family values and traditions, and would win your over with her cooking ability; family and friends raved about her freshly prepared steaks, roast beef, turkey ham, stuffing and potato salad.

Beverly entered the world as a force to be reckoned with. She wielded a heavy stick, but knew how to be the life and light of any room she entered.  She was fun-loving and stylish, and passed her sense of community and civic engagement on to her children.

Services will be held Friday, January 17 at Triumph Baptist Church, 1648 West Hunting Park Avenue, beginning with a viewing at 9:00 am, and followed by the service at 11:00 am. Internment will take place at Northwood Cemetery, located at 15th and Haines Street.

The family is requesting that donations in Beverly’s name be sent to Triumph Baptist Church ( www.triumphbc.org) and Canaan Baptist Church (www.canaanbaptistchurch.org).

Beverly Johnson–From career to Cosby, Beverly bares it all!