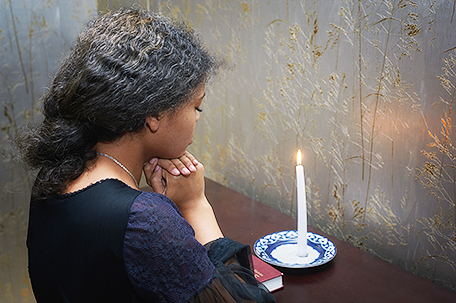 I have a dear friend named Cassandra Elliott. I wrote about her extensively in my book, “God Did It.” As of this February, she has been cancer-free for five years. Glory to God!

I remember visiting her in her North Carolina home during her illness. She was in a lot of pain and could hardly walk. Yet, every morning at 4:30, the dedicated worship leader would turn on her keyboard, play it, and sing praises to God.

It’s one thing to give God glory and lavish Him with praise in the good times. It’s another thing entirely to offer up a sacrificial offering of thanksgiving when everything is going wrong, amen?

Well, during the time I was blessed to share with Cassandra, I learned a few of her original songs she sang to the Lord. One of them is a plea for healing and talks about how God’s word will not return to Him void.

It is my favorite song and reminds me of the scripture I love in Isaiah 55:11.

After learning that song, I held it in my heart and sang it often. It was so comforting.

Well, a little while after, as I was going through a season of dealing with the trauma of sexual assault I’d endured as a child — really dealing with it — I had a rough day. My team and I were in the planning stages of the “No More Secrets” anti-sexual abuse campaign that launched that year. We have launched the #He Too anti- sexual assault awareness campaign this year.

While working on that “No More Secrets” campaign, the pain of my past assault resurfaced. Without warning, I was clobbered by grief.

I wonder: has hurt ever welled up to the surface and then boiled over unexpectedly? If it has, you can relate, on some level, to the way I was feeling. I was blindsided by it. This emotional breakdown came at a time when I was receiving biblical counseling and facing the heartache of what happened in a way I never had previously.

Dealing with it was far more painful than I realized it would be. I discuss that in my book, too. The things my molester did to me and the difficult emotions hit me all at once. I wept bitterly and uncontrollably. It felt like the pain was choking and suffocating me, as if I literally could not breathe.

There I was, in my bedroom, lying down on the floor, begging God for relief. I couldn’t utter any words aside from, “Lord, please help me.” The tears flowed and flowed.

And then, suddenly, I heard Cassandra’s song. Before I knew it, I was singing it. It came up out of my spirit. In the middle of my brokenness the lyrics and melody escaped my lips.

As I simultaneously cried and sang, something shifted inside me. The presence of the Lord visited me. Those tears of grief turned into rivers of praise and worship. I sensed the Lord giving me “beauty for ashes, the oil of joy for mourning, the garment of praise for the spirit of heaviness” of which Isaiah 61:3 speaks.

His anointing came upon me so heavily that, in my brokenness, I felt the warmth of His embrace. I can truly say there is power in our worship. God shows up when we exalt Him above our circumstances.

I’m reminded of 2 Chronicles 20. In this passage, enemies came against King Jehoshaphat, Judah and Jerusalem.  The Moabites, Ammonites, and Meunites were ready for war. But God’s people weren’t. They didn’t feel confident that they could win.

So you know what Jehoshaphat did? The king called a fast and consulted God. People from all the cities within Judah came together and sought the Lord for help. They started talking to God about how He was the one who had driven their enemies out before, and given them the land they were currently occupying. They reminded the Lord of His covenant with Abraham and how they built Him a temple, a dwelling place, to worship His name.

Israel further expressed that, without God, they had no power to defeat this great multitude coming against them. They admitted they didn’t know what to do and told God, “But our eyes are upon You.”

I love that they shifted their focus to God, the only one who could alter the course of destiny, change things for the better, and cause situations to work out favorably!

God responded by sending a word through Jahaziel, the son of Zechariah, whose lineage was tied to the Levitical Priesthood.  He said, “Do not be afraid nor dismayed because of this great multitude, for the battle is not yours, but God’s.”

God also told Jehoshaphat, “You will not need to fight in this battle. Position yourselves, stand still and see the salvation of the Lord, who is with you, O Judah and Jerusalem! Do not fear or be dismayed; tomorrow go out against them, for the Lord is with you.”

The next day, just as God said, they didn’t even have to lift a finger against their enemies. Rather than fight, Jehoshaphat appointed people to sing to the Lord.

Let’s zone in on this.

Verse 22 says, “Now when they began to sing and to praise, the Lord set ambushes against the people of Ammon, Moab, and Mount Seir, who had come against Judah; and they were defeated.”

Talk about shifting the atmosphere! When Israel worshiped, their enemies turned on each other and slaughtered their fellow soldiers. God’s people didn’t even have to fight. The word of the Lord came to pass.

Then, after the war was over, when it came time to collect the spoils, strewn among the numerous casualties, Israel found precious jewelry and “more than they could carry away.”

“When you worship, something happens. The enemy can’t stand it when you get in the presence of the Lord.”

In fact, the word of God says, it took them three days to get all the spoils because it was so much. Look at how the enemy was defeated after God was exalted! Worship led to victory.

When the people called on the name of our God and lifted Him up, He showed up in a big way. The attack of the enemy not only didn’t work, but God flipped it and used it to bring increase into Israel’s lives. They went from being outnumbered by the enemy to being overwhelmed by God’s favor.

Right now, you may be going through something too difficult to fix. You’re not reading this by accident. Your life may feel broken beyond repair. You need guidance and direction. The war the enemy has waged against you might go well beyond your capacity to fight in the natural.

But don’t fear. Use your spiritual weapons. Combine the sword of the spirit, which is the word of God, with some worship and praise. That’s the way you assault the enemy.

Do you remember in Acts 16:25, when Paul and Silas were in prison and they began to pray, and sing hymns to God? When they did that, verse 26 says, “Suddenly, there was such a violent earthquake that the foundations of the prison were shaken. At once all the prison doors flew open, and everyone’s chains came loose.”

When we touch God with our praise, He breaks chains, destroys yokes, releases captives and causes things to happen. The prisoners, who were in the presence of anointed worship, got set free, too!

No wonder praying and worshiping believers terrify the enemy.

Today, it might look like you’re at a disadvantage, but you’re not, because you have supernatural weapons. Use them and declare, this is not my fight; this is not my battle; it belongs to God.

God is for you. He is the one who vindicates you. He takes on the enemy. No matter how intense the attack, He stands ready, willing and able to defend you and set you free. You activate His power when you pray and worship. And that’s why your prayer and worship terrifies the enemy.

So don’t let anything stop you from crying out to God and communing with Him. There is a great victory with your name on it; just use your spiritual weapons.

To remind you of this truth, I’m stirring 2 Corinthians 10:4 NIV into your cup of inspiration, which says, “The weapons we fight with are not the weapons of the world. On the contrary, they have divine power to demolish strongholds.”

As you drink down the contents of your cup, stay focused on using your stronghold-demolishing weapons this week. Get in your word. Pray without ceasing. Worship in spirit and truth. Declare that you are more than a conqueror through Christ!

You are an anointed worshiper with power to drive out the enemy.

If you’ve been under attack in your faith, in your home, on your job, in your body, in your relationship, or even your mind and emotions, use your weapons, and watch God shift things.

**The #He Too campaign was launched in 2018 by Dianna Hobbs. It empowers sexual assault survivors of faith and color to not only use their voices to share their stories, but also, to see how Christ’s story and His redemptive work on the cross has power to heal their pain. It shows women that they don’t have to be bound by what was done to them; they are free because of what Christ has done for them.