BE INSPIRED: God will do it quickly 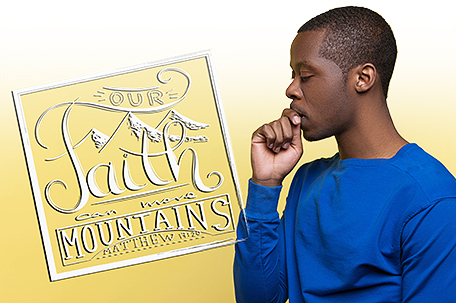 Waiting on God to move can feel like it takes forever, especially when a lot of things are going wrong. When situations get hectic and you feel overwhelmed, if you aren’t careful, you’ll push prayer aside. It will land in the “desperate measures only” category.

I remember someone in need of prayer told me they had lots and lots of troubles. “Things have gotten so bad that prayer is all I have left,” they said, feeling desperate and out of answers.

My response to them was, “Prayer is all you need. Prayer should never be a last resort. It must be the first option.”

Today I was reading Luke 18 where Jesus told His disciples a story for a specific purpose: to show them that they should always pray and never give up.

There was a judge in a certain city that didn’t fear God and didn’t care about people. When a widow in his city begged him to side with her in a dispute with an enemy, the judge ignored her for a while. But she was persistent in her requests. Finally, according to verse 5, the judge said, “…this woman is driving me crazy. I’m going to see that she gets justice, because she is wearing me out with her constant requests!’”

She got justice in the end because she didn’t stop asking.

Jesus said, if an unjust judge will help a person who is persistent, “don’t you think God will surely give justice to his chosen people who cry out to him day and night? Will he keep putting them off?  I tell you, he will grant justice to them quickly!”

That word “quickly”, in the Greek is tachos (Pronounced takh’-os), which means shortly, speedily, or soon.

So then, the word of God assures us that if we are persistent in prayer and cry out to Him both day and night, He will come to our defense speedily. He will make sure to right the wrongs in our life. He will ensure that the outcome will be favorable … and He’ll do it quickly.

If you have been praying earnestly and seeking God’s face relentlessly, He has heard every single cry, and He’s about to move for you. The enemy has come against you. The force of the opposition is strong. But you didn’t stop crying out, as we talked about in yesterday’s blog. So the Lord is rushing to your defense. He is stretching forth His hand in response to your relentless prayers.

He’s doing a quick work. You’re going to see a rapid turnaround. The status of your situation is changing. Victory is yours because you called on the name of the Lord.

In light of this truth, you have every reason to rejoice and be confident. Despite what the enemy is trying to do, you can boldly declare Isaiah 8:10 NIV, which is what I’m stirring into your cup of inspiration, which says, “Devise your strategy, but it will be thwarted; propose your plan, but it will not stand, for God is with us.”

As you drink down the contents of your cup, know that the weapons of warfare the enemy is using against you won’t succeed. Why? Because God is with you. It’s time to condition your mind to receive a breakthrough. If you know you have sought the Lord with all your heart, get ready for the turnaround you’ve been waiting for to manifest. Believe that your moment has arrived to receive what you have been expecting and more.

As you believe God for your situation, also join me in praying for some of the individuals on our “Thoughtful Thursdays” prayer list, that have asked to have their petition posted here. I know there is power in agreement. And as you intercede for them, God will move for you. No matter what it is, the Lord is more than able to fix it and turn that thing around for you.

God is doing this thing HIS way