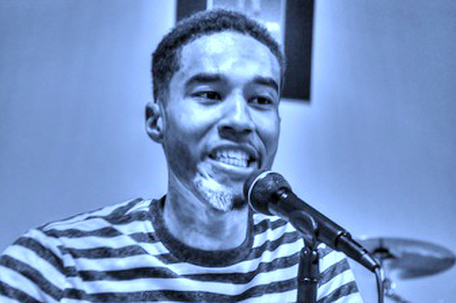 Since the start of  2015 up and coming rapper Andre Saunders has been trying to grab the attention of as many ears as possible.  But, he also wants you to know that his talent extends beyond his MC skills. In an interview with the SUN, Saunders talks about his inspirations and what motivates him to do what he does.

SUN:  What made you want to become a rapper?

AS:  Two things: At first I was playing around with it, but when I started getting serious with my poetry and having more substance in the content—I was able to take a more honest approach to the lyrics.  I consider myself more than a rapper.  I don’t wanna be put in a box, I’m an artist, I don’t want to be boxed in, I’m not the typical rapper.

Second: When I found out I was good at it [rapping] and the release [of performing], people embrace you after they see you in your element.

KA:  Where do you pull inspiration from?

AS:  Personal experiences.  Most of my music is positive and uplifting, but it can’t all be 100 percent positive.  Stuff I’ve been through or seen.  Other artists aren’t doing it.

AS:  Weird (laughs).  Sometimes I’ll get the energy to write in poetry form without music.  Other times, I’ll get a beat and write music based on how I feel it.  I’d rather type on a computer or a phone as opposed to pen and paper.  In the studio, I just want to hear and feel the music and go from there so a lot of times I won’t write anything down, I’ll just go from what I’m thinking or feeling through the music.

SUN:  Where do you see yourself in five years?

AS:  I’m 23 now.  I’m not naïve to the fact that it takes time to get there.  I don’t necessarily have to be signed but I want to be established.  J. Cole just turned 30 and became mainstream.  I want to at least be close to finding my way by then.  Have unconditional love by then.  I don’t see myself working a regular job if I don’t have to.  (Committing to hip-hop full time.)  I want children, and I don’t wanna be an old dad, so I guess around 28 I’ll start having kids but it depends on the person.  I don’t need to have flash, but I want to be content.

SUN:  Are you currently signed?  Would you want to go mainstream?

AS:  No, I’m not signed.  I wanna be mainstream, but mainstream and still doing music I wanna do.  Or if I’m on an independent label, a good enough company that can really put my stuff out there like Absoul.  Whatever makes sense to live comfortably.

AS:  Lauryn Hill.  She basically stripped down gimmicks of flash, her songs were honest, and the lyrics she wrote were incredible.  You don’t really get a lot of female rappers with substance.  I feel her music like I feel Tupac’s.  She was one of the first to acknowledge her flaws.  Newer artists would be Wale because of the poetry in his lyrics, and Drake because he says things that people think but don’t know how to express.

Saunders music and poetry play to the emotions.  This could be in part because he listens to a lot of 90s R&B, or because he is in tune with his inner poet, offering his verses in shows alongside Yellow Rage and Sonia Sanchez.  While he listens to all kinds of music like Tink, he watches a lot of Def Poetry Jam and takes notes from rappers who are in tune with their emotions and feel what they are saying rather than just saying anything.

Saunders is always busy in Philly’s underground hip-hop circuit, performing at shows, reciting poetry for his fan base, or making videos for his projects.  Chances are you’ve seen his face if you follow the poetry movement in Philly.  He is currently working on “Tryna Be Remembered,” an intimate album that will dig deeper into his personal life and experiences, tackling family and childhood struggles.  He wants to make his audience aware that everyone has flaws, and they should not be afraid to acknowledge and learn from them.  Also in the works is documentary/short film collaboration with director Lay chronicling both of their personal lives.  Andre Saunders is making sure his fans, followers, and newcomers remember who he is.