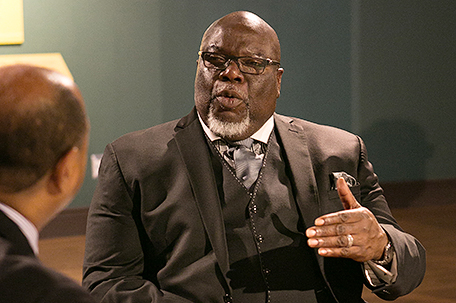 “If I reach back far enough, I can touch my own family slavery in a very personal way.” – Bishop T.D. Jakes

DALLAS – Inside a provocative exhibit about Thomas Jefferson and slavery, Bishop T.D. Jakes was reminded of his own enslaved ancestors.

Jakes, who has visited Africa many times, proudly talked about his Nigerian roots. He said Dr. Henry Louis Gates, a professor of African and African American research at Harvard University, arranged a DNA test which confirmed that Jakes’ ancestors were from Nigeria.

“Going back there recently, I went into an area that was predominantly Ibo and it was kind of emotional to me,” Jakes said. “Because they made presentations to me – my house is decorated with a lot of African art – and they were telling me this is what your language sounds like.”

“And I think of how so many people look at Africa and they talk about poverty, but when I looked at it, I thought they are so rich in ways that we are poor.” Jakes said. “They know who they are, they know whose they are, they know where they came from, they proudly understand their languages, and in that way, we are very poor and so there needs to be a greater exchange between us as people, because for me it was like regaining a part of myself that was lost.”

Jakes is the honorary co-chair of a new traveling exhibit, “Slavery at Jefferson’s Monticello: Paradox of Liberty,” which will run from Sept. 22 to Dec. 31 at Dallas’ African American Museum. The exhibit, which premiered at Smithsonian’s National Museum of American History, breaks new ground by focusing in more detail on the life of Sally Hemings who was enslaved with an estimated 400 other men, women and children on Jefferson’s 5000-acre Monticello plantation. The exhibit showcases more than 300 artifacts.

Some of Jefferson’s items on display include a finely carved chess set, his eyeglasses and bookstand. Also, a medicine bottle from Paris that may have been brought back by Sally Hemings during her time in France; a portion of a black pot (Jefferson encouraged his slaves to marry and gave them a black pot as a wedding gift) and an arm chair used in the house that is believed to have been made by John Hemings, a gifted furniture maker.

Meanwhile, Jakes reflected on the artifacts, which conjured images of enslaved Africans aboard slave ships heading from West Africa to the Americas.

“All of the people who got on the boat were not the same people, but they had to unify in order to survive under stress.” Jakes said. “It’s an amazing story when you think about it. They didn’t even speak any other’s language, so [while there] was a certain amount of distrust under the planks of the ship, there was a huge enemy above and so in that sandwich dimension of history we survive, nonetheless.”

“We learn how to communicate with each other,” Jakes continued. “We learned how to become a people. We struggle with what to call ourselves – ‘darkies’ and ‘coloreds’ and ‘niggers’ and ‘Negroes’ and all of these names that were thrust upon us is a reflection of trying to identify ‘who am I?’.”

Dallas is the first city to host the exhibit that will feature additional objects that have never left Monticello. Other stops for the exhibit include Detroit, Richmond and the West Coast in 2019.

Jakes said slavery was also about survival, people who were forced into a violent life and stripped of everything, including their names. He added that slavery and contemporary issues of race are forever intertwined, and he stressed the significance of the Dallas exhibition.

After Jakes completed a tour of the exhibit, he sat inside one of the museum’s upstairs galleries, glanced at a panel about enslaved African people, and spoke philosophically about slavery’s 300-year impact on the world.