A Reward Is Coming 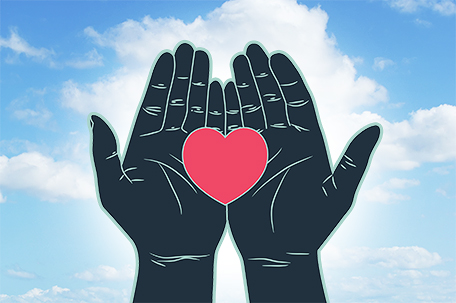 I love the pink artificial flowers I keep in my bedroom. They hold special meaning.  They were given to me last January in Charlotte after I finished ministering at a three-night revival. A sweet 10-year-old named Amanda walked up to me after service with her mom and shared an amazing testimony.

She had a stroke at 4 and the doctors were convinced she would not live. Statistically, the odds were against her. Each of Amanda’s nine friends, all with the same medical condition, died at the exact hospital where she was being treated. I welled up in the sanctuary thinking about how this precious child had to live through the loss of every single one of her peers.

How difficult that must have been.

It seemed inevitable that little Amanda would be next in line. But, by the grace of God, she was spared. Amanda told me that hearing about my near-death experience let her know that the Lord has a reason for allowing her to remain alive. That’s when she handed me those pink flowers—a simple, yet profoundly meaningful gesture.

Amanda offered the small gift she had from a genuine place. I was deeply moved and impacted, which is why I’m still talking about it almost two years later.

Friend, what you have to offer may not be extravagant, but it is worth so much.

I’m reminded of the story of the poor widow in Luke 21:1-4. In the temple, she put her offering of two small coins in the collection box. These coins were called “mites,” translated from the Greek word lepta. A lepton was worth a halfpenny. Two lepta were the equivalent of one cent. Essentially, the widow gave a penny in the offering. The rich people, on the other hand, gave far more than that. In the natural, what the widow offered was worth the least. But in the spiritual, it was worth the most, because she gave her all.

Jesus said, “This poor widow has given more than all the rest of them.” She sacrificed everything she had. The wealthy givers, however, only released a small portion of the large amount they could afford.

This impoverished woman’s amazing sacrifice, which came from a pure heart, got Jesus’ attention. As a result, she is singled out in scripture and we are still being inspired by her example today.

Friend, when you give your all to God, you get His attention.

Giving your all is not necessarily about dropping money in the collection plate at church. That may be a part of it, but it’s much more than that. Giving your all means honoring God with your life, committing everything you have to Him out of a place of loyalty, devotion and reverence. It’s about doing the right things consistently, even when you don’t feel like you’re getting right results consistently.

When you give your all, Heaven takes notice.

Sometimes, you may feel overlooked, undervalued and insignificant. It seems like your work, faithfulness, faith and perseverance are all in vain. But not so. The seeds you have sown will produce fruit. God rewards faithfulness. Keep on going. Continue serving the Lord with everything you have and watch what He does. Good things are about to happen for you. You are not forgotten.

To encourage you to continue on, I’m stirring 1 Corinthians 15:58 NIV into your cup of inspiration, which says, “Therefore, my dear brothers and sisters, stand firm. Let nothing move you. Always give yourselves fully to the work of the Lord, because you know that your labor in the Lord is not in vain.”

As you drink down the contents of your cup, rejoice in knowing that the seeds you have planted in the soil of faith will yield a mighty harvest reserved for the faithful.

God is pleased with your perseverance. He delights in seeing you pressing, serving and trusting, even when the benefit of it is not immediately apparent.

That’s why you’ve got some rewards coming your way. Expect them show up.

As the scriptures says, “So let’s not get tired of doing what is good. At just the right time we will reap a harvest of blessing if we don’t give up”  (Galatians 6:9, NLT).

The reward will be greater than the pain

The rain is coming