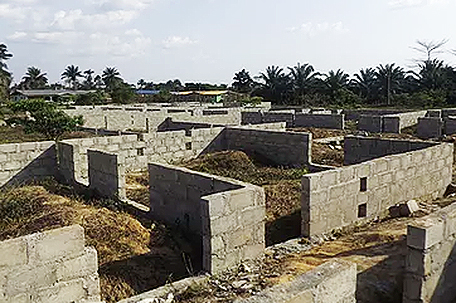 The first Liberian Civil War extended between 1989 and 1997 —  still, the country remains enthralled in a maelstrom.

Against a horde of issues that pervade from the first Liberian Civil War, (including a curtailed follow up and a poor economy), the country’s medical care system has shown little to no signs of improvement. Due to the lack of resources and funding, external assistance has been an integral factor in building the country back up to what it once was, but the process has proven untenable .

Dorine Gono, a Liberian native, sensed that the first war was brewing far before the kettle sang. Subsequently, she made the conscious decision to escape before she faced what seemed like an inevitable death. Prior to her departure, her grandmother, Yei Kaalu, gave her a virtual ticket much more valuable than the physical one that would land her in Philadelphia:

“Get your education, return home, and give back to the community.”

Christmas Day  1986 was the day that Gono left Sanniquellie City, Nimba County, Liberia in pursuit of a better life.  She left two young children, her grandmother, and her father behind, but vowed to keep the promise she made to Yei-Kaalu.

With the knowledge that a career in service would directly align with her grandmother’s wishes, Gono was stuck with a decision: to teach or to become a nurse. She ultimately chose a career in nursing after seeing how little teachers in the United States were revered.  She attended Community College of Philadelphia, Camden Hospital, and Frankford School of Nursing and earned her nursing certification. She would not return to Liberia until 2006.

In 2007, Gono again returned to her native land. Throughout her visit, she was reminded of her grandmother’s essence. The presence of Yei-Kaluu — who died in 1993 as a result of the war — remained pungent. Her voice rang like a million silver bells in the ears of a newborn baby, reminding Gono that she had yet to fulfill her promise.

With a nursing degree in tow and a purpose, Gono took immediate notice to the state that the country was in.

“The hospitals were a joke and I wanted to fix [them]… I wanted to build a hospital like one here [in the U.S],” she said.

The fire was lit. She immediately developed a strategy. .

She joined what’s called a SuSu as a means to embark on her new project;  a hospital built in honor of her grandmother. A SuSu is a type of informal savings group arrangement comprised of people who take turns by contributing to a pool of money once per time period. Each period, the funds are given to a single member of the group and recipients change period to period.

The initial plan was to raise $6,000 to buy four acres of land: three for the hospital, and one for a house that she would stay in while visiting.

Aside from the money that she’s received from the SuSu, and other small donations, Gono has funded much of the hospital with her own personal paychecks.   Some of the sacrifices she made to see the hospital come to fruition were selling her home and vehicle and working multiple jobs.

The money raising process has proven to be difficult as she’s received  little to no support. She cites that her “network is mainly African people, but Africans do not like to give.”This creates a financial strain, both in her personal and professional life .

Currently, there are approximately 45 people aiding in the building process, people who work for little to nothing, ($2.00/hour for laborers and $3.00/hour for bricklayers). Yei Kaalu Memorial Hospital is planned to be small, but will   contain 20 rooms, a kitchen, a library, an x-ray lab, a dining room, and a gift shop. The tentative opening is scheduled for either 2024 or 2025, but she hopes that she can complete it before then.

The hospital will serve many surrounding areas as well, including the Ivory Coast and Guinea.

Gono visits Liberia once or twice a year and always brings clothes, medicine, and vitamins with her. Thankful for her care, the natives often gift her with whatever they have and some even call her “oma”, which means mom. She continues to send money and resources on a consistent basis. Once the hospital is complete, she plans to teach the staff how to “run the hospital and how to behave.”

“They think that I am rich, but they have no idea how much I am struggling.”

Through both tragedy and triumph, the process has proven arduous, however Gono has identified the hospital as an entity that’s bigger then her.

“The dream was imparted by my grandmother, so I’ll never stop.”

The list of needed donations includes, but is not limited to: