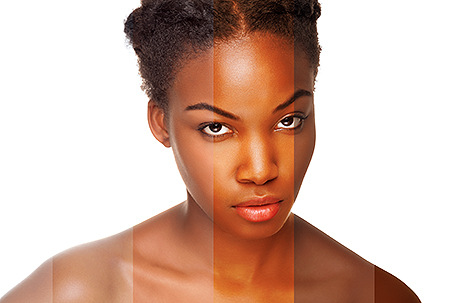 Naturally, humans participate in comparative literature – as a means of survival I suppose, but mostly, it feels like an unnecessary necessity.

Depending on the group God has placed you in, the circumstances likely vary, but it seems that most of our communities’ jive with a similar multi-colored wretch…Colorism.

Colorism has plagued countless communities for quite some time, and though our world has reached new heights of diversity that my ancestors couldn’t have even fathomed, skin color is often still the guarantor of social ranking.

I presume that skin comparison is a timeworn practice, but for Black people residing in America, it’s likely that the concept was most perpetuated during slavery, and though we are far from the physical bondage of the 15th-19th centuries, mentally, we’re still there.

It’s hard to realize the direct effects that slavery has had on us at first glance, but once you really begin to analyze the root of much of our thoughts and actions, it’s obvious.

Differentiating between slaves based on skin tone is the perfect example of how oppressive tactics employed by slave masters still hold rank today, we have a name for it now.

The means of separating people by skin color has taken the shape of many different vessels. Almost immediately after slavery was abolished, Black people unearthed an “advanced method” of “house negro vs. field negro” by creating the brown paper bag method: A practice used by various groups, churches, nightclubs, schools, Greek organizations, etc., to determine who was to be accepted and who was not… Further disseminating a process that was made to be divisive and not in our best interest.

As of late, our day to day conversations have become inundated with talks about privilege and who does/does not have it, but it’s not as simple as black and white.

Though the “house negro (good/light) vs. field negro (bad/dark)” mentality is discernibly crippling, our community continues to succumb to those same notions as if we live in oblivion. And what’s more unfortunate is that Black children are born with the innate ability to differentiate between even the slightest difference in hue, knowing immediately where they fall on the social ladder.

I am neither dark-skinned nor light-skinned, but being in the middle is no easy feat either. In fact, I remember thinking I was boring, but it wasn’t just me that I felt that way about… it was everyone else who had medium brown skin, thick “black” hair, and brown eyes as well. In my eyes, we were not special, not even close. So when people would ask me what my racial makeup was, I’d bashfully tell them that I was “just Black”. I felt ashamed for being so plain, but I felt ashamed for feeling ashamed as well.

I was never explicitly told that lighter skin was “better”, but it’s an unspoken understanding that all Black people come to know and despise. I’d always thought that my grandmother was the epitome of beauty: She’s very fair-skinned, has the most amazing emerald eyes, and has hair that even silk worms envy.

I remember being so proud to be related to her, not because she was an amazing person, (which she is), but because I thought she was white, (which she is not).

A 1943 study conducted by psychologists’ and civil right activists, Kenneth and Mamie Clark, has proven that I was not alone in my sentiments as a child. Their “doll test”, which was designed to test children’s consciousness of race and color, has been done many times over the years with consistent results: The vast majority of children who participate STILL choose the lighter-skinned doll over the darker one.

A few weeks ago, I was talking to my White co-workers about colorism, and for reasons unbeknownst to me, I was surprised that they had no idea what it was.

I think about race relations fairly often, but interracial tension adds yet another dimension to the equation.

I guess it was most surprising that at least in my small space in this world, the very folks who taught us to view ourselves differently have become ignorant to the deep seated division that their ancestors have caused. For too long, we’ve viewed ourselves through the eyes of what others have taught us to think.

It doesn’t matter whether you’re as bright as a morning star or a dark as the midnight sky or somewhere in between, you matter. You belong here and you are beautiful. I’m hopeful that one day we stop internalizing division and instead embrace our beauty.