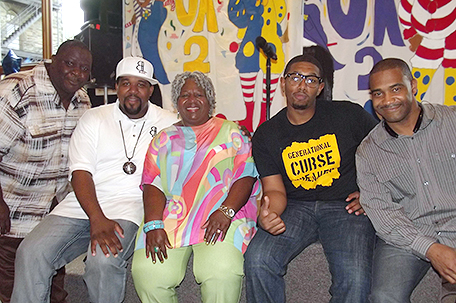 On Saturday, July 19th, New Covenant Church of Philadelphia served up a different kind of ministry as they presented a program filled with good, CLEAN Christian humor. The audience, comprised of New Covenant congregants, guests from other churches and the community were all overwhelmingly delighted.  It’s O.K. 2 Laugh Production Company, the brainchild of Philadelphian Anthony Trott, had the audience in near hysterics with stand-up comics who kept the uproarious laughter going for more than two hours of routines filled with a mixture of top-notch comedy and very personal testimonies.

The program began with the melodic voice of Gospel singer Crystal Heath, First Lady of Living Waters Church in Collingdale, PA. Her soul-stirring performance opened the door for the all-Christian cast of uniquely-gifted comedians.

Acting as emcee and entertainer, Philadelphia born and bred, Buddy Love was amazing! He brought his own take on everything from relationships to surviving in this economy; and his uncanny impersonations were a major crowd pleaser, as he kept the audience engaged and eager for the routines of each of his fellow comedians.

Simply Shirley (Breeland) informed the audience that she was there for the AARP generation; but her “old school” humor had everyone in the audience, from the young children to the adult-seniors, rolling in laughter.

Rob Minor, from the Nicetown area was impeccable in his performance which included an amazing Michael Jackson impersonation and completely transparent as he shared how he’s loved comedy since he was 14 years old. He knew he would become a great comedian through a prophecy of his grandfather.

Kasaun Wilson, a native of Jersey City, New Jersey, was hilarious in his spontaneous interactions with the audience and unashamedly sincere as he repeatedly emphasized the importance of a man, as a role model, in a boy’s life.

The show was brought to New Covenant by Elder Ardellia Jones, Director of New Member Care at the Church. She, Ruby Davis (the Data Recording person) and several other New Member Care workers had seen the production at another venue and were thoroughly impressed. Davis accepted the responsibility to bring this exceptional ministry to New Covenant. Elder Jones stated, “The goal of our ministry was to make a contribution to the church, through the comedy show, to help others experience God and fulfill His purpose in their lives.  We have been able to make the contribution; and we are very pleased with that accomplishment.  Many thanks to New Member Care Workers and all others that worked so hard to make it happen.  To God be all the glory.”