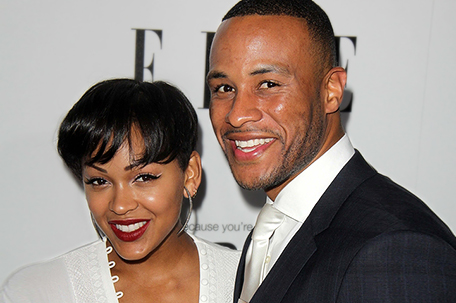 When 4-year-old Colton Burpo had emergency surgery for a burst appendix, he didn’t just go to the hospital.

He went to Heaven.

That’s the story behind the new movie Heaven Is for Real, a new movie that opened on Wednesday and stars Greg Kinnear as the Colton’s father Todd.

The movie is based on the book that Todd, a minister in a small Nebraska town and Lynn Vincent wrote about the boy’s experience. The book went on to become a  New York Times  bestseller.

When the book was brought to the desk of DeVon Franklin, senior vice president of production for Columbia Pictures, he believed it would make a great film for those who like a more faith-based movie experience. Among the other producers for the picture are mega pastor T.D. Jakes.

Franklin spoke to the SUN about the film, his hopes for it, and how standing by your principles can keep you from having to make certain compromises in an industry where compromises are the norm.

SUN: Thank you for taking time in your schedule. Mr. Franklin.  First before we talk about the movie, “Heaven is for Real”. I want to say Congratulations on your upcoming award! How do you feel receiving the 2014 Trumpet Award? Being an Honoree? (Airing on Easter Sunday)

DeVon Franklin: It’s an honor to receive this award in Media and Film I look at that although I’ve been at Sony for nine years and I’ve done a lot it’s like a “down payment” on what I will continue to do in my career in the future. It reminds me to keep pushing and that there is a lot more to do!

SUN: Please tell us about the movie, “Heaven is for Real”.

DeVon Franklin: “Heaven is for Real” is a captivating and inspiring story. I read the book in one sitting three years ago I could not put it down. It’s the story of the Burpo family…namely Colton Burpo at four years old, having a near death experience and him meeting Jesus and his trip to heaven. All that he saw was so compelling. This was just one of those books that I just knew it was a destiny thing that I had to do as a producer.

SUN: Who else did you work with on this movie?

DeVon Franklin: The script was developed by me along with TD Jakes and other producers. We were all feeling the purpose behind this story.

SUN: What kind of message do you hope viewers get from “Heaven is for Real”?

DeVon Franklin: We want to bring hope and inspirations to the world through the experience of a young child. We hope that it is a message of peace to those who have lost loved ones and who may be wondering what happens. This young child, Colton Burpo, comes back and says in so many words, “You don’t have to worry so much.”

SUN: Can you be a Christian and be in Hollywood?

DeVon Franklin: Yes you can be a Christian in Hollywood!  This project is probably one of the few movies, which some may refer to as a “faith based film”, I don’t like to label it I see it as a film. But it one of the few movies that I can remember a studio championing and developing it all the way through to distribution it’s a huge accomplishment. It was home grown from top to bottom.

SUN: As a Christian, have you ever rejected a movie that didn’t align with your beliefs?

DeVon Franklin: Here’s the good news…the way the studio system works, even as a producer each executive has the area that their tastes align with, those are the movies they buy, those are the movies they attract and those are the movies people want them to work on. It’s really been fantastic that when you come into a studio system part of the goal is identifying your taste then working in that area so you can provide more value for the company. My experiences I’ve been able to do with movies like; “Jumping the Broom”, “The Karate Kid”, and “The Pursuit of Happyness” to now “Heaven is for Real”. I’m interested in movies that uplift, entertain, inspire and are good for the whole family. That has been the material that I’ve been able to attract. Once you declare what your tastes are things that don’t fit with you (me) don’t even come your way.

SUN: How long have you been a Minister? It’s interesting that you are Minister and a movie executive…which came first?

DeVon Franklin: I started preaching at 15 years old. But I didn’t want to do it…I was fleeing ministry and went into movies. I became an executive about 11/12 years ago.  I was ordained about a year before becoming a movie executive. Ministry is first. The more I grew in my career the more I embraced my calling…the more doors opened…the more I was true to myself and who God created me to be. Interestingly enough the two really do work well together more than I ever thought possible, more than others think is possible.

SUN: There are other movies which are Biblically oriented like Son of God and Noah what do you think about the “surge” of “faith based movies” is about at this time in Hollywood?

DeVon Franklin: It’s a vibrant market. It feels like this movie is perfectly aligned and timed for release at this time. I’m very excited about it and all that is happening with movies like Heaven is for Real.  Heaven is for Real is precisely the kind of movie that represents who I am.

SUN: How closely to the book does the film follow?

DeVon Franklin: Very close. There are key moments in the book that depicted in the movie. It’s not literal because the book isn’t a novel because it was written the way that Colton, who was four, experienced heaven. We took some creative license for craft it into a movie format. We worked with the entire family on the film for authenticity.

SUN: What do you want viewers to walk away with from Heaven is for Real?