A Celebration Of Impact 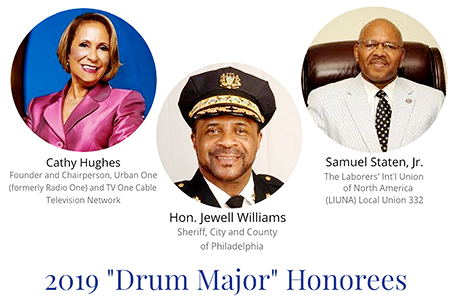 When Kyle Morris was a young teenager, he got himself into a little bit of trouble. For some of our teens, when that happens, a lot of people will write you off and figure you’ll never make anything of yourself.

Morris shared some of his story.

“I was 14-years old and I heard about a College for Teens program,” he said. “It was one of the last years the program was running full blast, and it was a dynamic program where you got to spend four weeks taking classes on the campus of Cheyney University. Prior to the four weeks at Cheyney, we spent about two weeks in prep classes at Martin Luther King, Jr. High School. While at Cheyney, we took some college level classes, literary classes and music. They required us to write a play and as a team, perform the play. It was really fun. I learned a lot. I enjoyed myself and it gave me that desire to go on for higher education.

The reason why that program was so important to me was because at that time, I didn’t really know who I was. At that time many young people were dealing with trying to figure out who they are, and I was one of them. I was having an identity crisis. Because I am Black and at that time, living in a White neighborhood and attending a Puerto Rican high school, I really didn’t know how to identify. I found myself leaning towards hanging out with the wrong young people and I ended up getting arrested before summer was over. I was blessed in that nothing really bad happened to me, even though I had gotten into a little bit of trouble. But I wasn’t allowed to come outside for the rest of the summer.”

“Having to stay in the house also turned out to be a blessing for me, because it gave me a chance to reflect on my life and my goals,” Morris continued. “It helped me to find a little bit of peace, and it helped me with my academic growth. Through all that, the Philadelphia MLK Association hung in there with me. They didn’t drop me from the College for Teens program. I was ready to go back to school in the fall and I discovered my whole life changed for the better. I was a rapper at the time, and I remember writing my first raps which I still remember today. It was one of the first positive rhymes I ever wrote that didn’t include killing somebody’s son, or selling drugs, or anything else that was negative. That was a transformational time for me. I’m still an artist to this day. I actually teach creative writing. I ended up becoming enrolled at Cheyney University’s Keystone Scholars program, which paid for my master’s degree at Lincoln University on scholarship. I was able to stay in education, and it all started with the Philadelphia MLK Association.”

Right now, Morris says he’s committed to helping the Philadelphia MLK Association raise funds so the College for Teens program can be revived this summer at Cheyney. Each student who participates needs a sponsor who will cover the cost of  a four-week stay on campus, which costs $1,837. It’s a reachable and a doable goal Morris says, and he’s determined with the help of others to do his part to make sure that other young people like him have a chance to be in a great program like College for Teens.

Yes, it’s a fancy, downtown event where upwards of 800 guests sit at tables and dine on a delectable meal. However, it is also a time when the memory and legacy of Rev. Dr. Martin Luther King Jr. is lifted up and those in attendance are reminded again to try and live their lives like Dr. King would have wanted us to: To be the best you can be at whatever line of work you go into, To seek peace and positivity in the community and to build bridges of understanding amongst the various races.

The luncheon is also the single fundraising event the King Association hosts each year that fuels the  other programs they offer throughout the year. Without funds raised, the King Association would not be able to host programs such as the College for Teens program, Kids Serving Kids program, and the annual holiday party for children from low income families.

One of the 2019 Drum Major Award recipients, Cathy Hughes, founder and owner of Urban One, (formerly Radio One) and TV One said, “Receiving the award is humbling. I don’t think I got lucky. I got blessed to be selected one of the award recipients this year. I’ve attended the King Association event quite a few times in past years. Dr. C. Delores Tucker was one of my key mentors in the development of my career and direction. Bill Tucker has stayed in touch with me over the years since her passing. Quite frankly, a couple times when I came up to the luncheon in past years, I sat there, wishing I could receive a Drum Major Award from the King Association. Now this is my year.”

“If you listen back to Dr. King’s old speeches, you know, as we’re preparing for this weekend, he sounds like he’s talking about today,” she said. “The things that he focused on, and lost his life over, are still issues that have not been resolved for our community. So I am thankful that various groups and organizations keep his legacy alive, but people talk about Dr. King had a dream. Dr. King woke up from a dream and realized that he was going to have to really be a leader of a movement to change America.

We’ve made strides, there’s no question about that, but it almost seems like we (in the African-American community), advance and then retreat. In my opinion, we’ve taken more steps backwards, than we have forward, although there has been noticeable historic forward movement in some arenas. We still have so much work to do, and certainly it’s great to give Dr. King honor and tribute, but I think if he were here, on the celebration of his holiday, he’d be saying things like, ’I don’t need you all to celebrate me. I need you to use this day to really change some things.’”

Through his work — the mobilization of  African-Americans at the height of the Civil Rights Movement — Dr. King never forgot that he was a man of God and a Baptist preacher. He believed in prayer, often inserting Bible verses into some of his speeches.

Hughes says prayer is also key to her.

“The first year, after I went public with my radio stations, at my first annual meeting, I opened the meeting in prayer,” she recalled. “I didn’t know that that was strange. The next day when I picked up the “Washington Post” newspaper’s, front page business section, it talked about ‘Cathy Hughes opened up public stock holders annual meeting with a prayer.’ I made up my mind then that every year I would open that meeting with a prayer and praying that I’d still be there for the next year.”

“I’ve always been a praying woman,” Hughes continued. “For me, it was right around the age of 16 when I really started communicating with God and praying to God. That’s when I started asking God to love and direct me, to guide and protect me, show me what to do. People like to sometimes give me credit for things. I say no, I’ve just been obedient to the messages I hear from God when I’m saying my prayers, when I’m thinking about someone greater than me or anyone else. Getting this award on Monday is just another indication to me of receiving something on behalf of the Creator, because I followed the instructions and directions He gave me – to be of service to my people.”

Philadelphia Sheriff Jewell Williams will also receive a Drum Major Award. He stated that he is honored and also humbled to be selected as one of the Drum Major Awardees for 2019 and he plans to continue to do the work that he knows Dr. King would want all of us to do.

The third Drum Major Award honoree for 2019 from the Philadelphia MLK Association is Sam Staten, Jr.

“Those that know me, know I’m not a man that likes to do a lot of talking and pontificating,” Staten said. “I like to roll up my sleeves and get the work done, just like my father before me. Dr. King respected union workers. He fought for us and we’ll always fight to keep his memory and legacy alive.”

The Philadelphia MLK Association will host their annual award banquet this year at the Philadelphia 201 Hotel located at 17th and Race Streets, from 12 noon to 3pm. There will be a performance by the Philadelphia Girls’ Choir, as well as a keynote address from Alan Gubernick, chairman for the Anti-Defamation League of Philadelphia.

Gina Ross and Ken Harbin will receive the C. Delores Tucker Award for Volunteerism during the luncheon as well. As of press time, it was questionable whether the annual symbolic ringing of the Liberty Bell would take place at 5th and Market Streets as it always has since 1986, due to the ongoing federal government shutdown. Since the Liberty Bell Pavilion sits on federal property, it is closed indefinitely.

“Even if the Trump federal government shutdown is still unresolved by Dr. King’s National Holiday, we will do a mock ringing of the Liberty Bell ceremony inside the ballroom at the Philadelphia 201 Hotel, just as the hour strikes 12 noon,” Dr. William Tucker, president of the Philadelphia MLK Association said. “One way or another, we will still celebrate on Dr. King’s national holiday.”