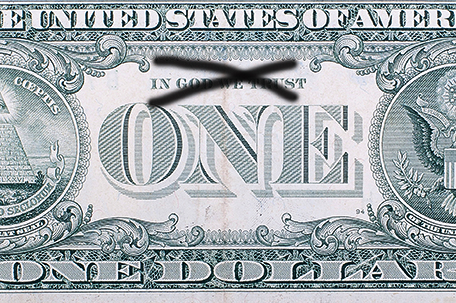 Nearly half of college students believe the national motto, “In God We Trust,” should be removed from U.S. currency, according to a new survey.

The poll of 1,001 college students found that 45 percent believe it should be removed and 53 percent say it should remain. The survey was conducted for The College Fix by College Pulse, a survey and analytics company.

The Supreme Court this year rejected a challenge to “In God We Trust” on currency and upheld a ruling by the U.S. Eighth Circuit Court of Appeals. In that earlier decision, the Eighth Circuit ruled the motto “does not compel citizens to engage in a religious observance.”

“Placing the motto on money is rationally related to the Government’s legitimate goal of honoring religion’s role in American life and in the protection of fundamental rights,” the Eighth Circuit ruled.

Further, the Eighth Circuit said, “The Supreme Court has long recognized the ‘unbroken history of official acknowledgment by all three branches of government of the role of religion in American life from at least 1789.’” The decision noted that the “[t]he First Congress made it an early item of business to appoint and pay official chaplains, and both the House and Senate have maintained the office virtually uninterrupted since that time.”

But many college students nevertheless want the motto removed.

“We live in a secular nation, not a theocracy. Best to remove,” a Clemson University student said in the survey’s comments section, according to The College Fix.

A University of Alabama student, though, wrote, “It’s one of the US’s mottos, and all countries put their motto on their currency, so it’s fine so long as it’s a motto.”

The survey asked: “Do you believe the motto ‘In God We Trust’ should remain on U.S. currency or should it be removed?”