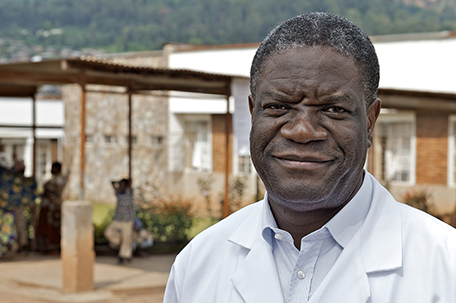 2018 Nobel Peace Prize was awarded to Dr. Denis Mukwege and Nadia Murad for their efforts to end the use of sexual violence as a weapon of war and armed conflict.

Mukwege, a gynecologist and surgeon, has treated many women and girls effected by rape and sexual violence in the Democratic Republic of Congo (DRC).

Murad, a Yazidi woman from the norther Iraqi town of Sinjar, was held as a sex slave by ISIS, she reported to CNN in an interview last year. In 2016, at the age of 23, she was made a UN goodwill ambassador for the dignity of survivors of human trafficking.

According to Berit Reiss-Anderson, chair of the Norwegian Nobel Committee, “Both laureates have made critical contributions to focusing attention on, and combating, such war crimes.” Her comments were offered when she announced the award at the Norwegian Nobel Institute in Oslo last week.

“Denis Mukwege is the helper who has devoted his life to defending these victims. Nadia is the witness who tells of the abuses perpetrated against herself and others,” said Reiss-Anderson. “Each of them in their own way has helped you give greater visibility to wartime sexual violence, so that perpetrators can be held accountable for their actions.”

Mukwege, nicknamed “Dr. Miracle” for his specialized procedures, said that his Christian faith was a massive influence on his decision to pursue medicine and his strategy for patient care. The son of a Pentecostal minister, Mukwege told NPR that he was inspired to become a doctor after traveling with his father to pray for the sick. Mukwege attended the University of Angers in France to study gynecology and obstetrics.

Over the past 20 years, Mukwege has treated thousands of women in his Panzi Hospital in Bukavu, which he founded in 1999 with the help of the Pentecostal Churches in Central Africa (CEPAC). Since its opening the hospital “has treated more than 85,000 patients with complex gynecological damage and trauma, an estimated 60 percent of the injuries have been caused by sexual violence.” The hospital provides care for women, many of whom have been gang raped by militants.

Mukwege told NPR that he works “not only to treat women—their body, [but] also to fight for their own right, to bring them to be autonomous, and, of course, to support them psychologically. And all of this is a process of healing so women can regain their dignity.”

Last year, at the Lutheran World Federation, Mukwege, during a keynote address, challenged the audience. He noted that if Christians do not live their lives faithfully among their communities and neighbors, “we cannot fulfill the mission entrusted to us by Christ,” a mission he has spent his career trying to fulfill.

Mukwege, 63, has received support from Christian organizations in his fight against sexual and gender-based violence (SGBV) in the DRC.

“Dr. Mukwege’s incredible work with survivors of sexual and gender-based violence in the Democratic Republic of the Congo inspires me, and many of us,” according to Rick Santos, president of IMA World Health. “We are honored to call him and Panzi Hospital a partner in the effort to eradicate SGBV in a place where it is so pervasive.”

“Christianity Today” reports that 3.9 million people have been killed and more than 40,000 have been raped in the decade since the civil war broke out in the DRC in 1996.  Also noted was Mukwege is recognized as the “world’s leading expert on repairing injuries of rape” and his Panzi hospital also offers services beyond surgery and injury repair. The institution also offers therapy, legal assistance, community resources, and help reintegrating into the community for their patients.

Motivated by his faith, Mukwege encourages other Christians to consider “the credibility of the gospel in the 21st century, to liberate the grace that we have received by making the church a light that still shines in this world of darkness through our struggles for justice, truth, law, freedom, in short, the dignity of man and woman.”