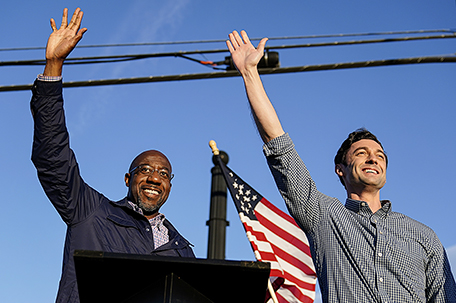 A pastor who spent the past 15 years leading the Atlanta church where Martin Luther King Jr. preached, Warnock defeated Republican incumbent Kelly Loeffler. It was a stinging rebuke of outgoing President Donald Trump, who made one of his final trips in office to Georgia to rally his loyal base behind Loeffler and the Republican running for the other seat, David Perdue.

The focus now shifts to the second race between Perdue and Democrat Jon Ossoff. The candidates were locked in a tight race and it was too early to call a winner. Under Georgia law, a trailing candidate may request a recount when the margin of an election is less than or equal to 0.5 percentage points.

If Ossoff wins, Democrats will have complete control of Congress, strengthening President-elect Joe Biden’s standing as he prepares to take office on Jan. 20.

Warnock’s victory is a symbol of a striking shift in Georgia’s politics as the swelling number of diverse, college-educated voters flex their power in the heart of the Deep South. It follows Biden’s victory in November, when he became the first Democratic presidential candidate to carry the state since 1992.