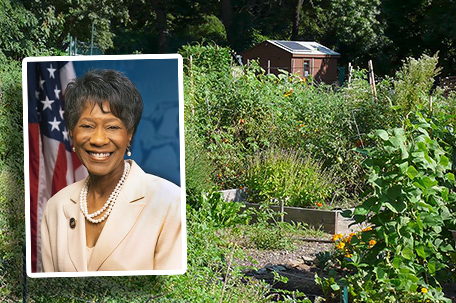 A .65-acre Philadelphia parcel used as a community garden will be maintained as open space due to a $225,000 state grant announced today by state Rep. Rosita C. Youngblood, D-Phila.

Youngblood said she strongly supported and advocated for the “Greenways, Trails and Recreation Program” funds through the Commonwealth Financing Authority (CFA) because the current owner, Germantown Friends School, planned to put the Old Tennis Court Farm property up for sale.

“This parcel has provided many social and environmental benefits for years, so the logical choice is to preserve it as a highly valued community asset,” Youngblood said. “This state funding will help the Natural Lands Trust Inc. acquire the property to ensure and maintain its current nature.”

Youngblood said the tract has added positive impact on the 198th Legislative District because it’s been successfully used as a community garden and neighborhood gathering place for six consecutive years.

Mark Kearney, co-president of the Friends of Cloverly Park and one of the lead organizers of the Old Tennis Court Farm Protection Project, said the group is very grateful for the grant.

“It recognizes and honors the community’s desire to acquire the former site of the Old Tennis Court Farm, preserve it from development and return it to use as productive greenspace,” Kearney said. “We appreciate the support and encouragement that Representative Youngblood and other elected officials, community organizations and community members have voiced for this project. We look forward to reactivating the Old Tennis Court Farm as a community garden for the residents of the surrounding neighborhoods and as a source of fresh, organic produce for local food security programs.”

The CFA was established in 2004 as an independent agency of the state Department of Community and Economic Development to administer Pennsylvania’s economic stimulus packages.

Unique among state agencies in structure and scope, the CFA has seven board members: four legislative appointees, and the secretaries of DCED, the Office of the Budget and the Department of Banking. Project approval requires five affirmative votes, four of which must come from legislative appointees.

Brown: Fairmont Park getting $180,000 in state grant for revitalization