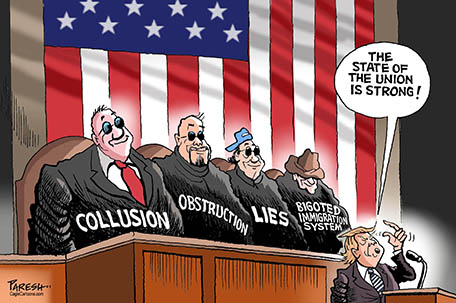 President Donald Trump gave his first State of the Union speech. No one chanted “Build That Wall!” I guess that’s progress.

In all honesty, if President Donald Trump had decided that he wasn’t going to give a State of the Union speech, I don’t think it would have surprised anyone.

I mean, hey, one of the reasons why the mainstream media seems to be determined to write a “Trump is changing the Presidential Game” piece at least once a month is because he hasn’t met a presidential norm, a rule, a relationship with an ally or a Constitutional Amendment that he hasn’t wanted to completely do away with. So why not blow off the State of the Union?

But because there’s nothing that President Trump loves more than a very large, very captive audience, especially when the part of that audience that voted for you will definitely watch because the alternative is the CW’s “Black Lightning,” he took to the podium for an address that usually gives people high hopes.

Notice I said “usually.” From his inauguration to the present day, Trump+a live microphone+a live audience has equaled such phrases as “American carnage”. So the bar set for Tuesday night’s speech was kind of low.

The good news is, he managed to clear it.

The bad news is, it was still pretty much a Trump speech.

While it wasn’t the kind of speech that Trump uses to rally his supporters at the campaign rallies he’s often held as president, and no one took to the House floor to chant “Build That Wall!” or “Lock Her Up!,” it still had a lot of the same elements.

For example, if someone could tell me how a tribute to Preston Sharp, a young man who put together an effort to put flags on soldiers’ graves on Veterans day, turned into yet another showcase of Trump’s lack of knowledge of the Constitution by taking a shot at NFL players protesting police brutality, I’d appreciate it.

But until then, I’ll address some of the policy issues that Trump touched on because while it’s new for him to be in a large room filled with people in front of a live microphone and actually talk about policy in complete sentences, he did manage to do it during the State of the Union.

I’m going to start with the opioid epidemic.

Here in Philadelphia, we’re having a robust conversation right now about how we handle what’s become a growing crisis. One of the solutions being kicked around by the Kenney Administration is providing heroin addicts with Comprehensive User Engagement Sites, or, if you’re not a fan, “safe injection sites”. At these places, users are connected not only with treatment options, but also with space to use drugs and medical personnel on hand to administer the overdose drug Narcan if needed.

Trump declared a state of emergency for opioids and said that he would put all of his weight behind the problem.

Apparently, that weight includes his favorite project: building a wall between the Southern border of the United States and Mexico.

I’m still having a little trouble seeing how this connects, so bear with me. Apparently, Trump believes that ending family reunification visas, building this wall to end so-called illegal immigration, locking up more people as part of Attorney Gen. Jefferson Beauregard Sessions’ ramping up of the so-called War  on Drugs, and the rest of his immigration plan will somehow keep drugs from flowing into the country and end the opioid crisis.

There are more than a few problems with that. One, opioids are poppy-based. Poppies are grown in places like Afghanistan, one of the many places in which we’re at war.

Two, we still don’t have a person in charge of the National Office of Drug Control Policy, otherwise known as the place that’s supposed to stop doctors from overprescribing Oxy-Contin, or as some folks call it “hillbilly heroin”.

And three, and this is most important, drug rehab costs money. Much of the money sent to drug rehabilitation centers comes from Medicaid, you know, that program whose expansion made treatment more available through the Affordable Care Act that you and your GOP friends have gutted like a fish?

Another bit of policy that caught my attention was Trump’s call for infrastructure improvements.

All you have to do is drive on the streets of Philadelphia to know just how important infrastructure is. We have potholes you could swim in around here. We’ve had a couple of bridges that we’ve had to repair recently due to how badly maintained they were.

Multiply what we have here in Philly several hundred times and you’ll get what’s going on across the country. You get stuff like bridges falling down as people drive over them. You get stuff like the ongoing water crisis in Flint, Michigan. It’s kind of scary.

To fix this, Trump wants a bill that would fund $1.5 trillion in infrastructure improvements. If that number sounds familiar to you, it should. It’s the same amount of money that got shaved off of the Federal Budget thanks to the GOP’s mammoth Christmas present to corporations, or as it’s better known, the GOP tax cut.

It’ll be interesting to see where this $1.5 trillion will come from. My guess is that a bunch of it will come from the Medicaid that opioid addicts need to get clean and the Social Security that senior citizens need to not have to figure out how to create a cat food casserole without anyone figuring out that was what you did.

This weekend, Republicans will be discussing how to make these and other things happen during their retreat in White Sulfur, West Virginia, a place where folks can probably get some of this “beautiful, clean, coal” Trump keeps talking about.

But my guess is that most of America has already decided, to paraphrase that noble sage, Jay-Z, We don’t believe you.

A State of Emergency

The opioid crisis in Black and White