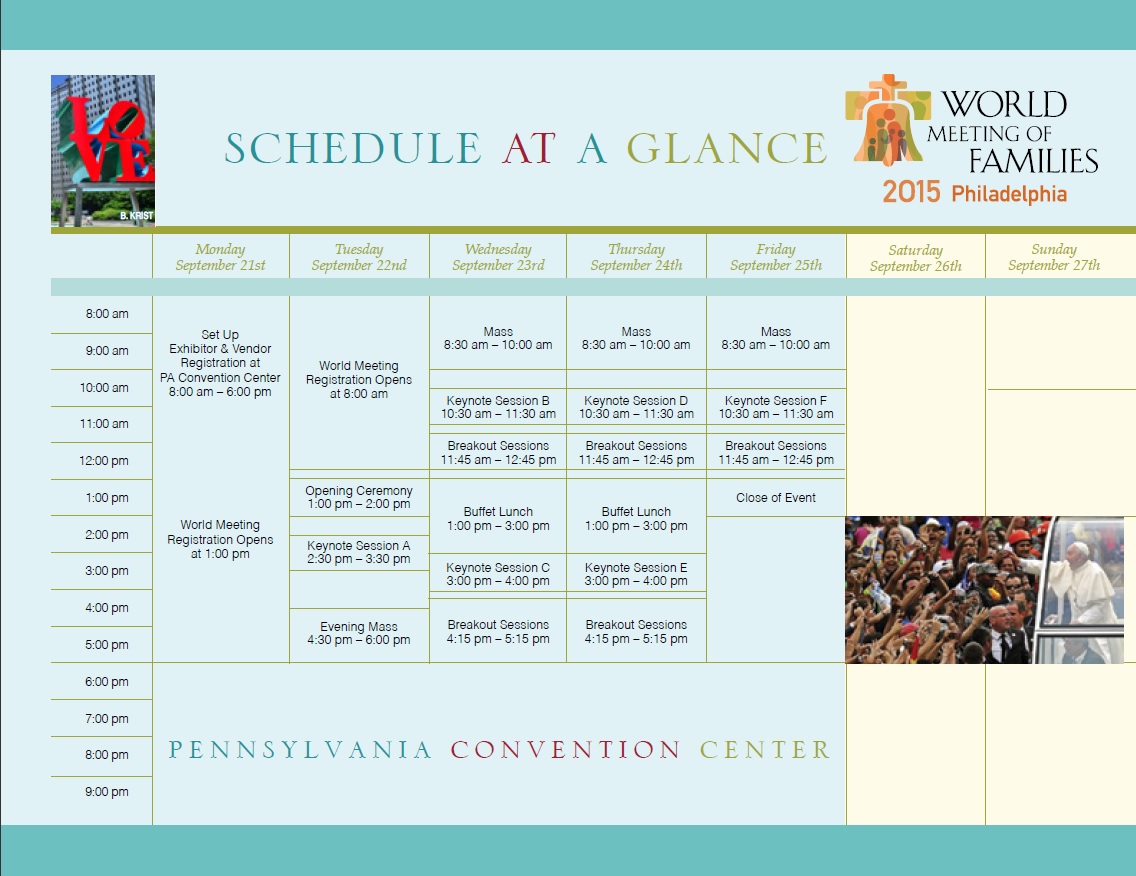 The World Meeting of Families Sept. 22-25, 2015 Philadelphia 2015 will offer an Adult Congress and a Youth Congress for ages 6-17.  There will also be a licensed daycare for children under the age of 6. The Adult Congress, for ages 18 and older, will consist of keynote presentations and breakout sessions that address the many ways in which families can strengthen their bonds, especially in the face of the significant challenges facing the family globally in the 21st Century.

“The World Meeting of Families will deal with a wide range of family issues where our faith is both sneeded and tested,” said Archbishop Chaput at the U.S. Conference of Catholic Bishops (USCCB) Fall General Assembly. “These are matters that affect families not only here in the United States but on a global scale. So we want to focus next year not just on the neuralgic sexual issues that seem to dominate the American media, but on things like the family and poverty, the family and addiction, the family and children with disabilities, the loss of a spouse, the effect of divorce and co-parenting, health and wellness as building blocks to preserving the family, creating real intimacy between husband and wife, the challenges of raising children, the role of grandparents, the parish as a support community for families, and similar themes. And we want to involve the whole community in this celebration, which is why we’ve included Jewish, Mormon, Muslim and Protestant presenters on issues that we all share -regardless of confessional divides.”

In addition to announcing the opening of registration, Archbishop Chaput also spoke about the impressive roster of influential leaders and scholars that the World Meeting of Families – Philadelphia 2015 will bring together to discuss the critical issues facing the family worldwide!

Nearly 100 renowned speakers are expected to present and facilitate conversation among delegates. From Baptist to Jewish to Lutheran, 24 percent of the Congress presenters will represent other faith traditions and 30 percent of presenters are from outside of North America.

When developing the programming and educational sessions, one of our goals was to create a Congress inclusive of people of all ages, all walks of life, all cultures and even other faiths so that every person might leave the conference feeling inspired by new ideas to incorporate into his/her family life. Through the grace of God and the messages shared during the Congress, we hope to reaffirm the importance of the family and strengthen its bonds on a global scale.”

As the world’s largest family gathering, the World Meeting of Families – Philadelphia 2015 is expected to bring together 10,000 – 15,000 delegates from more than 150 nations in faith and celebration. The Congress will provide delegates the opportunity to share their thoughts, dialogue and prayers during daily Mass, devotions and breakout sessions.

All sessions will focus on the myriad issues facing today’s global families, including financial crises/poverty, blended families, disabilities, addiction, divorce, and interfaith marriage, with speakers from the Pontifical Council for the Family, United States Conference of Catholic Bishops, Foundation for Family and Futures, National Catholic Partnership on Disability, Catholic Relief Services, among others. Rooted in the 2015 Congress’ theme, “Love is our mission: the family fully alive,” the catechetical content and programming will emphasize the impact of the love and life of families in society.