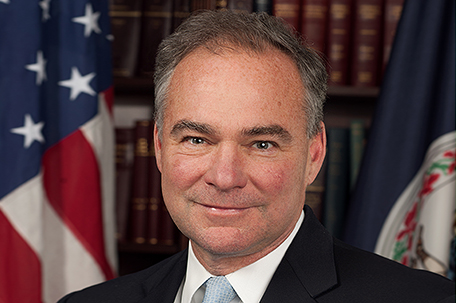 At a post-debate rally held at the Sheet Metal Workers Hall in South Philadelphia, Democratic Vice Presidential candidate Sen. Tim Kaine wore his admiration for working people and their sacrifice on his sleeve.

That’s because she had a story to tell; a story that many had seen on Twitter and in the Philadelphia Inquirer; a story about how one person can almost single-handedly decimate a city through their actions.

It was a story about Republican Presidential candidate Donald Trump, his relationship with workers, and how her hometown of Atlantic City, New Jersey was hurt as a result.

Brousse’s parents came to Atlantic City at the beginning of the city’s casino boom to get their piece of the pie. Brousse’s parents worked for Trump at the Taj Mahal and watched as he defaulted on everything from municipal bonds issued by the city to small businesses waiting to be paid for the contracting work they had done or, in the case of one merchant, the pianos they had installed.

When Trump ultimately filed for bankruptcy, and reorganized his company, a whole lot of people got left in the lurch, Brousse said.

“In 1991, 253 subcontractors were stiffed on $69.5 million in unpaid labor,” she said. “He didn’t put any money into rebuilding my devastated community, but he’s sued to have his name taken off of the Trump Plaza Tower.”

Because of his actions, the American people, particularly American workers, might want to reconsider putting Trump in a position where he might put his name on the White House, Brousse said.

[Trump]I is not the kind of person we need for president,” she said. “And that’s the reason I’m glad to be here to introduce Tim Kaine. You can trust Hillary Clinton and Tim Kaine because they’re for labor rights and support small businesses. They don’t just fight to win. They fight for us.”

Fresh off of a debate in which he was both praised for showcasing the fact that his opponent, Indiana Gov. Mike Pence, the Republican’s Vice Presidential candidate, couldn’t defend the stuff coming out of his running mate’s mouth and panned for being a bit too exuberant, Kaine came to the union hall to rally the troops as Pennsylvania’s Oct. 11 voter registration deadline approaches.

During Tuesday night’s debate at Longwood University in Farmville, Virginia, Pence and Kaine talked about a great many issues, including the economy and the plight of workers.

The story that Brousse told about her parents, Atlantic City, and the aftermath of the Trump era showed just how important this election is, he said. America in general, and American workers in particular, deserve better than being treated like they and their issues don’t matter, he said.

“She’s just telling it like it is,” Kaine said of Brousse. “She’s talking about this nominee, Donald Trump, who is unlike any other nominee we’ve seen before; somebody who’s claiming to be a big success but who has a track record of stepping all over small people, and that’s how he defines success – just like he defines smart as not paying taxes to support our troops and our vets and our teachers. And that’s what’s at stake.”

But unlike the Clinton/Trump contest, the interruptions came from the Democratic side. While Kaine admitted that his even his wife, Anne Holton, got on him a little bit for jumping in while Pence was talking, the bottom line was that he was trying to defend the indefensible, and couldn’t get it done, he said.

“Mike Pence is a pretty good debater,” Kaine said. “He’s pretty smooth. But there’s one thing he can’t do and that’s defend Donald Trump on anything. And so, again and again during the debate, I would say something that Trump said. And he wouldn’t defend it.”

“About two-thirds of the way through the debate, I said, ‘Well, look. Let me just point out what’s happening here,” Kaine continued. “You are Donald Trump’s running mate. And I’m putting these things down on the table and I’m asking you to defend them, and you won’t defend them. If you can’t defend your own running mate, how can you ask one person to vote for your running mate? At some points, I felt like both me and Mike Pence were debating Donald Trump.”

While the polls currently favor Clinton in places like Pennsylvania, the final poll is the one on Election Day, Kaine said. “Now is not the time to get cocky,” he said. “The work isn’t nearly done.”

“You’re the underdog until you’re the winner,” Kaine said. “If we have that underdog attitude, where we’re going to be the underdog until they tell us on the evening of November 8, ‘Hey, guess what underdogs, you just made history. You just elected the first woman president in the history of the United States and now we’re stronger together. We can build an economy that works for everybody, not just those at the top, we can build strength in the world with strong alliances. And we can build a community of respect, where everybody is welcomed around the table, everybody is valued. And that’s the history we’ll make if you and we – and we all do the work that we need to do.”