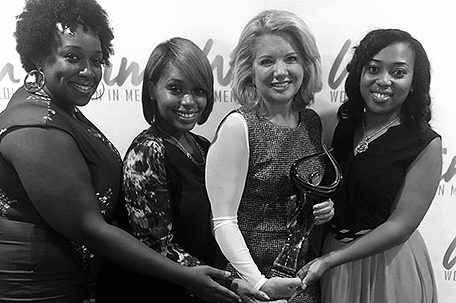 Saturday, September 24th was a busy day for many women in the Philadelphia region, as they came together to celebrate and learn from each other through the 4th annual Women In Media Conference.  Hosted by Danielle Jeter, CEO and founder of Affairs of Isis; Syreeta Martin, founder & CEO of Sincerely Syreeta & Co. LLC; and Haniyyah Sharpe-Brown, Communications Manager and CEO of On Point Communications, the all-day conference was well attended at “The View” on Montgomery Avenue.  Women heard from keynote speaker and NBC 10 anchor Tracy Davidson talk about the importance of self-care, who was also presented with the Aréte Media Award for excellence as a journalist.

Ladies were allowed to attend two out of four workshops of their choice covering topics from how to accurately depict Muslims in the media, to mindfulness and how to keep stress at bay, to podcasting and learning how to dare to dream big and go for your goals featuring Lu Ann Cahn of NBC 10 News.  The conference also featured a panel discussion with media influencers about how to get a foot in the door in an industry dominated by older white men.  The event ended with a cocktail networking hour. Women from all backgrounds are invited to attend this annual conference, as the glass ceiling affects all cultures, religious backgrounds and sexual orientations.  Being involved in the media was not a necessity, but an open mind, heart and friendly smile were required for the level of professional, empowering and inspiring stories participants heard in one day.  Make sure to be on the lookout for the Women In Media Conference next year!