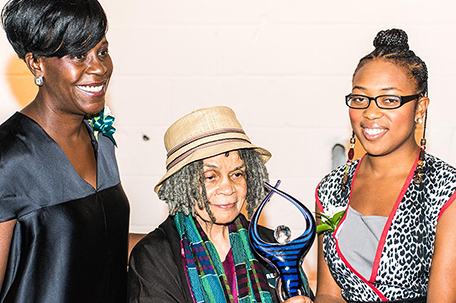 September has been quite a month for women in media.

If you are a woman in media and have any social media accounts or a radio, you have probably seen and/or heard something from the non-profit organization Women in Media, spearheaded by Commissioner Danielle P. Jeter, who founded the organization to combat discriminatory depictions of women in media.

The entire month of September was dedicated to programming aimed at Women In Media and culminated with the Fifth Annual Women In Media Conference at WeWork in Northern Liberties.

The theme of the conference this year was “Advocacy and Leadership: Be Seen, Be Heard, Be Bold,” and women were definitely inspired as the event started with keynote speaker and 2017 Arete of Media Sonia Sanchez, renowned poet, speaker, educator, and activist. She shared poetry and gave insight to the women there about how to speak up for themselves, live their best lives, and prepare for the future in these trying political times.

Media organization Philly CAM was also on hand to receive the Leadership and Advocacy Award. A plethora of experienced media mavens offered their advice in the form of workshops, panel discussion, and a media marketplace including City Councilwoman Cherelle Parker, State Rep. Joanna McClinton, Sara Lomax –Reese, president of WURD Radio, actress, and author and Trisha Graybill, who also served as the event’s emcee, award winning journalist Errin Haines-Whack, entrepreneur author and business strategist, Amber Noble-Garland, and entrepreneur and radio host Jeffrey Jones, the first man to host a workshop at the event.

From 9am-4pm the building was overflowing with good vibes, positive energy, impactful conversation, and thoughtful empowerment.

The month of festivities began with ‘WIM Wednesday’ began the festivities with a mixer that celebrated men in media on September 6. Next was a  wellness panel discussion on September 13, a  networking and fundraising mixer presented by the Philadelphia Phillies at Citizens Bank Park on September 20 culminating with Saturday’s Women In Media conference.

For those of you who missed out on the WIM programming and are interested in breaking into the media industry, be encouraged to follow this organization on social media: Facebook and Instagram @wimglobal & Twitter @WIMspeaks. Year five has been a big and busy one thus far as this organization branched out to start a chapter in Atlanta earlier this summer and continues to create events that allow women to dream big, network, and live their best life in and outside of the media spotlight.