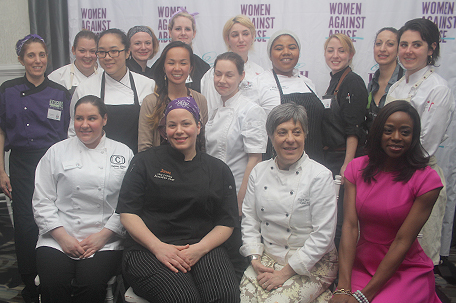 ABOVE PHOTO:  Some of the women chefs take a group photo with Dish It Up! evening host and 6ABC meterologist Melissa Magee (front row far right).  (Photo: Robert Mendelsohn)

The color purple reigned supreme on Wednesday, March 29th at Cescaphe Event Group’s VIE on Broad Street as hundreds gathered to sample offerings prepared by some of the finest chefs in Philadelphia and vicinity.

Attendees dressed in purple finery feasted on such delicacies as purple cupcakes, carrots, a signature purple cocktail and more in support of Women Against Abuse, a charity that provides services to women experiencing domestic violence.

The emcee for this year’s event was 6ABC meteorologist Melissa Magee. Magee is also one of Women Against Abuse’s honorary council members.

Dr. Julie Mostov, Senior Vice Provost for Global Initiatives and Professor of Politics at Drexel University was this year’s Woman of the Year. Mostov has served nearly four terms as chair of the Women Against Abuse Board and has spearheaded many innovative programs over three decades.

Renee Amoore, president and CEO of The Amoore Group, led a spirited “Text to Pledge Challenge.” Guests could text in their pledges and see them in real time on screens located on either side of the stage. The target goal for the challenge was $15,000, which was surpassed and matched by Amoore’s pledge of $20,000, raising a total of $40,361 during the evening. The final total raised from the event was approximately $165,000. 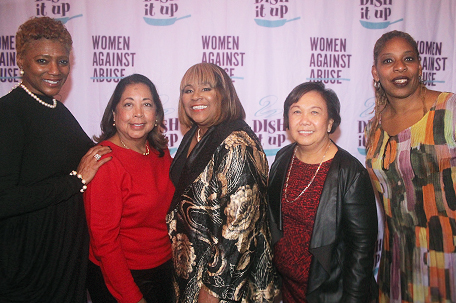 The winner of the Purple Dish Award was Lisa Lombo of Jones Restaurant for her sautéed shrimp with cauliflower grits and crispy kale chips dish.

Kitchen 19 Chef Christina Martin presented a vegan spring pea risotto, topped with a purple petite carrot and pea shoots. The dish was rich and creamy. The slight tartness of the purple carrot and the sweetness of the peas were a perfect accompaniment.

Aneu Catering Meredith Coyle presented chicken quesadillas with cilantro crème that were truly the best this writer has ever tasted. They were light and perfectly seasoned.

The Purple Cupcake Winner was Chef Abigail Daha of Parc, which was no great surprise, as her unique pistachio raspberry macaroon dessert was a crowd favorite.

For more information about Women Against Abuse, visit: www.womenagainstabuse.org.