Without question, W. Cody Anderson, made his mark 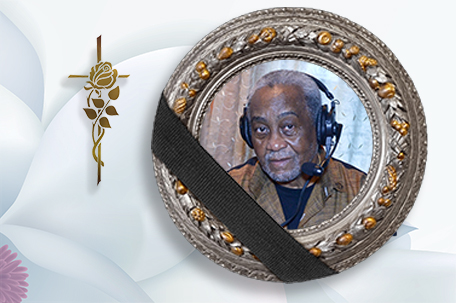 So many kind things have been said about Philadelphia radio icon W. Cody Anderson during the years that he made his mark in the city.

However, since his passing last Saturday, the tributes and outpouring of love and respect have been beyond measure, according to Anderson’s sons Kyle and Bill.

In a post on Facebook that Bill Anderson wrote in honor of his father last Sunday, he said: “I’ve been sitting up all night trying to find the words to express the feelings of losing our father, husband and best friend our entire life. I don’t remember a time that my Father wasn’t there to guide us, correct us or love us. I have said many times, when asked why I wanted to work in media that I just wanted to be around the best man I’ve ever known. Kyle, Theresa and I quite literally spoke to our father every day and I’m not sure what life looks like without him. But I am sure that he prepared us to go on by showing us how to be strong, compassionate people who care about those around us. Dad, we’ve got Mom now, it’s ok to rest. He told my Mom weeks ago before getting sick that he wasn’t afraid to die because his faith was strong, and he would get to see so many loved ones that passed before him. God’s got my Father so I and we will spend the rest of our lives making him proud. Love you so much. Rest in eternal paradise.”

“Our family has been humbled and honored by the tremendous outpouring of love and support,” Kyle Anderson added. “In between tears…we’re heartened by the stories so many of you have told us about our Dad. Thank you all so much for sharing with us as we celebrate his life and contemplate our lives without him.”

William ‘Cody’ Anderson was born in Denison, Texas on February 25, 1942. He was raised in Chicago. Anderson graduated from Central State University in Wilberforce, Ohio in 1965 — the same year he moved to Philadelphia.

He was a proud member of Canaan Baptist Church  and a 33rd Degree Mason in the Prince Hall Masonic Lodge.

Anderson’s foray into the business world began with his days at Opportunities Industrialization Centers of America (O.I.C.) working with the late Rev. Leon Sullivan, to working at a Philadelphia bank, until landing a position in radio sales at WDAS AM/FM — turning those two radio stations into highly rated, popular and respected media outlets.

Through it all, Anderson always handled himself with grace and dignity.

He eventually purchased the 1340AM/WHAT radio station and turned it into a very successful all-Black talk radio format, which was a big hit in the community.

After selling WHAT in 2007, Anderson moved on to become a right-hand adviser to Dr. Walter P. Lomax, who had purchased 900AM/WURD. The WURD format would be dedicated to Black talk radio. Anderson served as a general manager at the radio station for a time, then as the co-host of “The Electric Magazine” with Vikki Leach on Saturday mornings until his death.

“Cody really understood how transformative media can be for Black people and for people who have been marginalized and caricatured and stereotyped,” WURD CEO Sara Lomax-Reese said.

She explained it was Anderson who convinced her father to purchase WURD, helping to keep Black talk radio alive in Philadelphia.

“My father bought WURD in 2002 at Cody’s insistence and introduction,” Lomax-Reese said. “And then Cody was the founding general manager of WURD and came up with the original format,” said.

At the same time that Anderson hosted his weekend talk show, he was operating his own media and advertising business full-time, which he did successfully for almost two decades. His number one client was Laborers Local 332, which also often kept him on the air with their radio program on Friday evenings on WURD.

Anderson also served as co-host for a couple of other programs on WURD. His warm, friendly, and genuine persona drew people to him like a magnet to metal. Wherever Anderson went, he was sure to draw a crowd.

One of the most successful ideas Anderson had for WDAS was Unity Day. Unity Day started as a small community gathering for about 500 people on Haverford Avenue. The second year WDAS hosted Unity Day on the grounds of Belmont Avenue and Edgley Drive.

The event subsequently attracted so many people that Anderson knew he needed a larger area; so he arranged for the event to held on Benjamin Franklin Parkway. At the height of its popularity, Unity Day, which was held every August, grew to 1.5 million people in attendance.

Community activist Paula Peebles was another person who became an on-air radio host because Cody Anderson gave her a chance.

“In my opinion, Cody Anderson was a visionary and unrelenting in his belief that we as a people could do better for ourselves through unity,” she said.

Many Philadelphia City Council members, fellow radio hosts and others posted online tributes to Anderson as they learned of his passing.

His desire to help others who needed help was a part of his personality that never wavered over the years; one of those people was celebrated life coach and author, Iyanla Vanzant.

“Cody was an all-around nice guy,” James said. “Back when we were fighting against the Philadelphia Police Department, the city and Rizzo and all of that, trying to get equal justice for our community and for our police officers, Cody was the one who allowed us to develop a radio show on WDAS/AM called “The Justice Hour.” We started that program in 1979 and that program is still on the air today, now at WURD.”

“Cody touched so many lives and made a difference in each and every one of us that worked under his leadership,” longtime radio announcer Mimi Brown of WDAS reflected. “Thank you, Cody. I believe God is saying, ‘Job well done, my good and faithful servant.’”

Ralph Stevenson, a published author, lifelong Philadelphia resident and friend to Cody Anderson was quoted to say, “W. Cody Anderson, a beacon of light and kindness, a warrior for the people, who will forever be remembered for the good he did for me personally, my family, the community at large, and all those people who had the pleasure of knowing this shining example of a beautiful soul.  His legacy will prevail.

“May I not be judged according to the mouth of the multitude; May my soul lift itself up before my heart and be found to have been righteous on earth; May I reach the hall of righteousness and the scales of Ma’at be balanced”

“I formally met Cody in 1983 through the Honorable David P. Richardson, who took me to Cody’s office when he was general manager at WDAS Radio after a radio interview on the Georgie Woods Show, to ask for Cody’s support in promoting my [then] newest book, “Magic Meets Frederick Douglass”, an educational comic workbook,” Stevenson said. “A few minutes into my sales pitch Cody stopped me, reminded me that because Brother Dave brought me to him [that] he could see the clear benefit of us working together. He purchased 4,000 copies of the books to be donated to schools and community based organizations. As if that was not enough, when he learned that I did not have my books available in stores for people to be able to purchase, he contacted one of the station’s advertisers, a supermarket chain and arranged to have the books on sale at the supermarket.”

What happened with Ralph Stevenson is classic Cody Anderson. So many countless people have similar stories about Cody and how he helped them, even if it meant dipping into his own personal bank account.

The love of Cody Anderson’s life was his wife Verna. He also leaves behind his sons Kyle and Bill and daughter Theresa.

Details about Cody Anderson’s celebration of life is still pending as of press time.