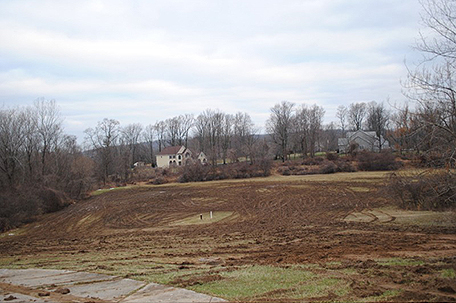 ABOVE PHOTO:  From Perkiomen Valley Patch

Students at Lankenau High School were reluctant to reach out for help after vandals invaded their school grounds, destroying its gardens and defacing its three yards.

With some encouragement, they exposed their plight and the community responded with unwavering support at kick-off of a grounds revitalization project last Saturday.

The vandals struck just before spring planting and growing season at the special-admissions environmental sciences magnet school in Roxborough. Students upon their return to school in mid-February were greeted with a horrific scene. According to English teacher Meredith Joseph, who encouraged the students to take a stand, they were devastated when they discovered that the grounds, they so lovingly cared for, had been deliberately destroyed. The destruction included deep ruts left by the tires of heavy trucking equipment, uprooted grass, destroyed gardens and defaced yards.

Seven students launched an effort to restore the school grounds. Those seven were later joined by members of the Botany Club, coordinated by teacher Jennifer Hardisky. The number then grew to 20, who were assigned responsibility for some portion of the restoration project.

The news stories about the school’s predicament captured the attention of neighbors, organizations, companies and compassionate individuals. Some were contacted by the students, but all offered voluntary services and aid to the rebuilding effort, which began on  Saturday, March 12, when four landscaping contractors completed the heavy work of regrading the land marred by tire tracks in the February incident.

Essential to the restoration effort was Patty Redenbaugh, a neighbor of the school and owner of City Plants, a garden design company.  According to Meredith Joseph, Redenbaugh was one of the first persons students called as they sought support from nearby landscaping companies. She was instrumental in contacting and coordinating the contractors, who volunteered their services and equipment necessary to complete the heavy grading work to repair the grounds. They included vendors Kingkine Tree Service, MG Labetti Associates, C & R Outdoor Services and Melady Landscaping. Roxboro Memorial Hospital contributed to the effort, donating soil, $1,000 and the labor of facilities workers, who will help put in a new split-rail fence to protect the field.

While the contactors manned the heavy machines, students walked the school grounds, removing trash and learned how to rid them of invasive plant species. Hungry volunteers must eat. So, Epicure Café provided lunch.

The Pennsylvania Horticultural society has promised stones and hardscaping features remaining from the recent Philadelphia Flower Show and has established a page at pennhort.net/lankenau where people can donate to the schools rebuilding efforts. Wendy Willard, on behalf of the Horticultural Society, helped to coordinate volunteer efforts.

The website is critical to the ongoing efforts at the school explained Joseph because the initial kick-off activity is only the first stage of the repair. The project cost, she said, far exceeds student’s initial estimate and regrading costs alone would have cost $25,000 without the help of contractor donations.

Additional support included assistance from the 5th Police District officers, who offered advice on protecting grounds to avoid vandalism. State Representative Pam DeLissio requested that students provide a list of needed materials and labor and is reaching out to her constituents for help. Kristine Soffa, a Democratic Committeeperson from the 21st Ward conducted outreach efforts and the Schuylkill center for Environmental education offered tools.

The Lankenau Students expressed gratitude for the support they received.  They also invite those who are interested in assisting to contact the school at 215-487-4465 or donate online through the Pennsylvania Horticultural Society at pennhort.net/lankenau.