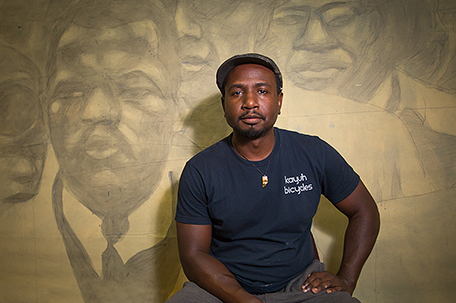 The newsletter Billypenn.com reported that Willis “Nomo” Humphrey, the artist who famously painted the Octavius Catto and Kevin Hart mural as well as more than a dozen murals and public art landmarks across the city, died of a massive heart attack last Wednesday, November 28. He was 44.

Humphrey’s body of work — notable for its vibrant color palette, multi-layered imagery and depictions of African American life — can be found on the facades of buildings from Germantown to Kingsessing. He recently designed high-profile homages to North Philly funnyman Kevin Hart and civil rights leader Octavius Catto. Over the last decade, Humphrey’s brush also contributed to the famous Roots mural in Center City, a profile of Malcolm X in West Philly, and numerous community-centered artworks that addressed issues like gun violence.

Mural Arts Philadelphia is mourning the sudden passing of their colleague, who the organization described as a generous and collaborative artist.

“He has graced the city with so many works of art and he has been a mentor and a source of light to so many artists, residents and community members,” Mural Arts director Jane Golden told Billy Penn.

Humphrey became a full-time staff member of Mural Arts in 2016, Golden said, but he has been erecting public art in the city for over a decade. A Mississippi native, Humphrey grew up in a military family that moved every few years, taking him from Japan to Italy to Arkansas. He went on to earn a degree at the Art Institute of Atlanta and later settled down in Philadelphia.

Billypenn.com contributed to this article.