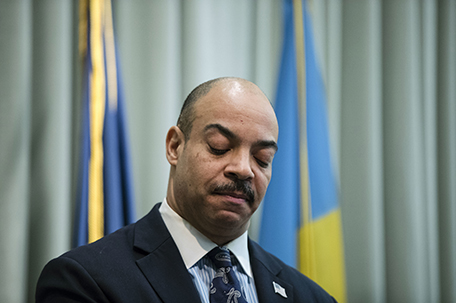 The R. Seth Williams Era at the Philadelphia District Attorney’s Office came to an ignominious end Thursday morning when Williams entered a guilty plea on one count of accepting a bribe two weeks into his corruption trial.

As part of the deal, Williams resigned, the city’s first black DA, effective immediately, was taken into custody by U.S. Marshalls, and was transported to the Federal Prison at 7th and Arch Streets to await his sentencing. In addition to five years in prison, Williams also faces a $250,000 fine and will have to forfeit $64,000 in gifts as a part of the plea agreement.

When the plea decision was announced, Williams made a request to remain out on bail pending sentencing.

Judge Diamond shut it down in no uncertain terms. Although Williams testified that he wasn’t a flight risk and had no money to work with, the disdain that had been slowly creeping across Diamond’s face the longer the trial went on came out in his words.

It was a disdain so total that he asked that Williams’s letter of resignation be sent to Mayor Jim Kenney’s office by courier.

“I have a guilty plea from the highest law officer in the city that he betrayed his office and sold his office,” he said. “I do not credit this defendant’s testimony. I do not believe him.”

By agreeing to a plea, Williams has given the District Attorney’s office the room it needs to move forward, said William Fitzpatrick, the Acting U.S. Attorney for the District of New Jersey. They were the lead prosecutors on this case.

“Today’s conviction is a great victory in the battle against corrupt conduct by public officials,” Fitzpatrick said. “Hopefully, today’s conviction will allow the people of Philadelphia and the dedicated employees of the District Attorney’s office to close this unfortunate chapter in the city’s history.”

In a press conference held on Thursday afternoon, First Assistant District Attorney Kathleen Martin attempted to do just that. Martin, who has been acting District Attorney since Williams lost his law license in connection with the corruption charges leveled against him, praised her colleagues for their hard work despite the distractions.

“The Philadelphia District Attorney’s Office embodies the phrase that the whole is greater than the sum of its parts,” Martin said. “The Assistant District Attorneys and professional staff of the District Attorney’s Office are among the finest in the country. Throughout this unfortunate period, they continued to display the diligence, fortitude, and integrity that has historically been a hallmark of the office. I could not be more proud of how my hardworking colleagues have conducted themselves in light of the investigation and prosecution of Mr. Williams.”

“Philadelphians should know that their District Attorney’s Office continues the pursuit of justice and the hope for a safer city endures,” Martin said.

The ball in terms of the District Attorney’s Office is now in the court of President Judge Sheila Woods-Skipper. The Board of Judges will have to meet and choose someone to fill Williams’s unexpired term. The last time this was necessary was 26 years ago when former DA Ron Castile resigned to run for Mayor. The judges chose one of their own, Lynne Abraham, for the post. She served as District Attorney until Williams was elected in 2009.

Williams’s decision to fall on his sword and plead guilty to taking a bribe from Bucks County businessman Mohammed Ali came after a long discussion with his lawyers after court yesterday, said Thomas Burke, Williams’s attorney.

After a week when the jury heard potentially damaging testimony from Deputy Police Commissioner Joseph Sullivan about Williams’s attempts to have him smooth Ali’s way through airport security, from former Friends of Seth Williams Executive Director Lisette Gonzalez about the ways he used the PAC to pay for such things as massages, facials and birthday parties for his girlfriend, and from Woody’s owner Michael Weiss about the plane tickets, money and cars he asked for and got from him, the handwriting appeared to be on the wall.

Or at least that’s what appeared to be the case when Williams and his defense team of Burke and Trevan Borum sat down to talk on Wednesday night.

“We had been up all night going back and forth over whether or not to take the plea,” Burke said. “Last night, [Williams] called me and discussed the possibility of a plea. I reached out to [Assistant U.S. Attorney Robert Zauzmer] who is a complete gentleman and said that he would offer the original plea. I discussed it with Seth last night and around 1:30 in the morning, he agreed to plead guilty.”

There were a lot of factors that went into that decision, Burke said. One was the fact that had he been convicted on the 29 counts, one of which was defrauding his mother’s nursing home, he would have been looking at substantially more jail time.

Another was the stress that the trial was putting on everyone and everything he loved, something that showed in his demeanor as he appeared before Judge Diamond, Burke said.

“He’s been concerned about the stress that [the trial] has put on his family, about the stress that it’s put on the District Attorney’s office,” Burke said. “He’s been humbled by the experience and he’s sorry for his conduct. When he came to the realization that he was going to have to resign from the office he loved and he had worked so hard to obtain, the realization that he’s facing jail time and time away from his family changed his demeanor clearly.”

“This is a dramatic turning point in his life,” Burke continued.

To call it dramatic is a bit of an understatement.

Williams, a graduate of Penn State University and the Georgetown University School of Law, came into office on a wave of criminal justice reform and presented himself as a breath of fresh air from Abraham, who was best known for her adherence to the death penalty.

While he managed to do some good things, such as revamp the office’s Charging Unit and placing District Attorneys closer to the communities they serve, Williams’s achievements were overshadowed by personal flaws, some of which came out in court.

He had a tendency toward stubbornness, which was evidenced when he retried Anthony Wright for the 1991 rape and murder of Louise Talley. Despite DNA evidence exonerating Wright, Williams retried him for the offense. Despite Wright’s eventual acquittal, the retrial was another example for the Black community that he was in it, but not of it, the other example being his unwillingness to consider commuting the sentence of Mumia Abu-Jamal.

He also had an unsustainable taste for the finer things in life, and some messy personal relationships, many of which ended up being discussed in court.

But now that the Williams trial is in the books, it might be time for Philadelphia’s public officials to understand that when it comes to using your office for anything other than serving the people, the Federal Government is not in the mood for games.

If you do the crime, you will most certainly do the time, Zauzner said.

“It’s unfortunate that periodically we have to gather like this and address corruption in the city and in the State of Pennsylvania,” he said. “Fortunately, at the same time there are thousands of honest public servants in this commonwealth and in this city and we hope that any who are questioning whether they should remain honest should see that if we do need to gather every four or five years for a case like this that we’re going to do it.”

Williams’s sentencing is scheduled for Oct. 24.