Will There Be Food? 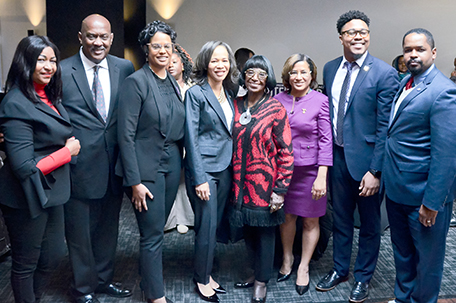 While I think it’s a great idea that the Democratic National Committee has created a new initiative designed to give Black women a Seat at The Table,I’d kind of like to know how much of the “food” of politics, money, can these ladies expect.

From the moment that Donald Trump took the oath of office as America’s 45th president in January 2017, the main number that’s come up when we talk about the impact of women in the 2016 election is 53 percent.

For those of you who don’t know why that is, 53 percent is the number of White women who voted for Trump in spite of his being a Neanderthal par excellence.

But there’s a bigger number that’s equally as important, and has been the deciding factor in a lot of races since. That number? 98 percent.

That is the percentage of African American women who voted for Alabama Sen. Doug Jones when he ran against Republican Judge Roy Moore to fill the unexpired term of Jeff Sessions, the man who currently serves as our nation’s attorney general and presidential chew toy. Thanks to these women, Jones became the first Democrat to serve Alabama in the Senate since Reconstruction.

Now because of this, Black women have been flexing their muscles in Democratic politics of late and it’s about time. When you are often the only thing standing between a political party and total annihilation, you should assert yourself more often.

During the Congressional Black Caucus Foundation’s annual conference in Washington, D.C., at a workshop called “The 98 Percent”, the panelists, a group of women that included organizers, candidates, and political operatives who had to make a way out of no way more often than not, made a demand of the Democratic National Committee: listen to and support us, or we’ll stop supporting, and most importantly, working for you.

In response, Waikinya Clanton, the director of African American and Women’s Outreach for the DNC, promised that there would be a “listening tour”, meaning that the party would listen to their concerns and take action on them.

On Tuesday, in a room at the Laborers Local 332 union hall in North Philadelphia decorated with signs that said, “Black Women Run”, “Black Women Lead” and “Black Women Vote”, the listening tour hit Philadelphia, complete with a new initiative called “A Seat at the Table.”

(Yeah, I know. It’s the same title of Solange’s last album. I’m surprised no one pointed that out.)

The idea behind this new initiative is to let Black women know that the party understands that they owe a lot to Black women.

“This new initiative is designed to meaningfully engage and organize with Black women,” said Adjoa Asamoah, a consultant working on the initiative. “We’ve been listening to Black women and we want to rebuild those relationships and restore trust.”

Which is why the parade of elected officials that praised the audience of political organizers, community leaders and others gathered in the room sort of made sense. From DNC Chair Tom Perez to Reps. Dwight Evans and Lisa Blount Rochester of Delaware, to Sen. Bob Casey, folks had tons and tons of nice things to say.

“I come here with gratitude because so many of the women in this room have helped me,” Casey said. “Usually, folks like me come to you and ask for your vote. We have work to do when it comes to helping you “lead” and supporting you when you “run.”

Perez reinforced that message when he took the microphone. When he ran for DNC chair, he recognized that the party was a “fixer-upper”, that trust needed to be restored, and that taking people for granted was costing them valuable people.

He vowed to make sure that the Party didn’t make the same mistakes twice.

“We had to rebuild trust with a lot of the people in this room and around the country,” Perez said. “I‘m here to tell you that we will never take anyone for granted again. The Democratic Party is a party of inclusion and we understand that Black women brought us Doug Jones and that Black women have brought us so many victories over the years.”

Perez then told the women to hold him accountable for his promises.

That’s where the one question that no one asked, the question about money, comes in.

Let’s keep it real. A big part of the success of “A Seat At The Table” and whether or not it succeeds in engendering the trust that it’s aiming for, is going to depend on how much money the DNC decides to spend on it.

So while there’s a lot of room for optimism here, and optimism is good, putting money behind the optimism is even better.

I mean, if there’s no plates, silverware, and especially food, a seat at the table won’t stop you from being hungry.