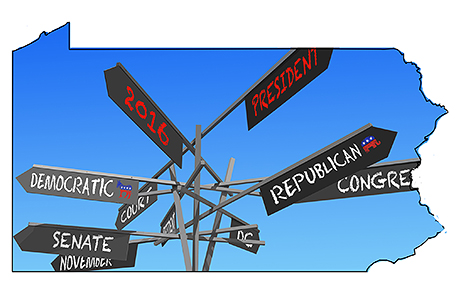 Not since 1976 has Pennsylvania really mattered in a presidential primary for either major party. This irrelevance has not been caused by competing presidential candidates simply snubbing state voters – nor from any decline in the state’s political clout.

Rather it is the consequence of an intransigent state legislature that can’t be bothered to move the state’s primary to an earlier date when the national party nominations are still unsettled. By the time the presidential primary contest reaches Pennsylvania in late April, it’s all over – even the shouting.

Happily, this unhappy state of affairs hardly mattered through much of the late 20th century on into the 21st century. That’s because Pennsylvania’s large electoral vote prize and the state’s usually competitive two parties combined to make the state one of the classic “battleground states.”

Neither “safe” for Democrats nor Republicans, Pennsylvania was a perennial “swing “state, and often a “must win” state in the fall presidential contest.  The election often came down to three electoral behemoths – Florida, Ohio and Pennsylvania. Win two of the three and you won the presidency.

So, while Pennsylvania did not matter at all in the spring presidential primary, it often mattered decisively in the fall general election.

That, however, may be changing. Many observers now believe the Keystone State’s days as a battleground state are over.

There is little mystery as to why the last several elections have gone Democratic. In most (if not all) of them, Democrats have out-hustled their GOP counterparts in motivating their core support, including young and minority voters, as well as winning the swing voters in the Philadelphia suburbs and the Lehigh Valley.

Regional trends have also helped Democratic dominance. The eastern areas of the state have been growing while most western Pennsylvania counties have been losing population. The dramatic migration of the formerly solid Republican Philadelphia suburbs to the Democrats in presidential elections exemplifies this larger pattern favoring the Democratic Party.

Therefore, are those who believe that the state is no longer a swing state correct? Are Pennsylvania’s days as a battleground state over?

In fact, a strong case can be made that Republicans could win Pennsylvania in 2016.

Hillary Isn’t Inevitable – To win, Democrats need a candidate that excites their electorate.  As the likely nominee, Hillary Clinton, with her Scranton roots and Philadelphia connections will be strong but not inevitable. If the presidential contest becomes a generational contest Clinton may not be able to generate the same enthusiasm Obama did in 2008. Already some early polls in Pennsylvania show her actually trailing or head to head with her likely GOP opponents.

Presidential Elections In Pennsylvania Are Close – Other than Obama’s 10-point win in 2008, presidential elections in the state have been close. Other Democratic winners have never received more than 52% of the popular vote.  Of the widely watched swing states, Pennsylvania had a closer popular vote in 2012 than either Iowa or Nevada – and was within a percentage point of the Colorado vote. Every indication now points to another close election in 2016.

The GOP Was A No-show In 2012 – Romney made only cursory visits to the state and then only at the end of the campaign.  Obama clearly led in the polls, but Romney never seriously contested him. Consequently, little money was spent in-state – even less effort compared to past elections.  Still, Obama only won the state by five points, making it the 6th closest swing state in 2012. Romney lost Pennsylvania because he thought he couldn’t win it and therefore didn’t try.

Democrats May Struggle In 2016 – State Democrats have a huge potential problem next year. They have to defend two important state offices up for election: state treasurer and attorney general – both shrouded in controversy.  The state treasurer resigned while facing criminal charges and the current attorney general’s short tenure has been marred by huge controversies.  Moreover, holding the governorship has not been helpful, historically.  The state has a long history of voting for presidents from a party different than the incumbent governor.

Republicans May Be Resurging In Western Pennsylvania – There is growing evidence that the western half of the state has been for some time diverging electorally more and more from the east. Obama lost the Pittsburgh media market in 2012, the first time Democrats had lost there in more than 20 years. Some Republican strategists see a great untapped reservoir of GOP support among unregistered voters. This may be more a victory of hope over experience.  Nevertheless, the stage could be set for a re-invigoration of the old conservative “Reagan Democrats,” particularly in southwestern Pennsylvania.

Pennsylvania will matter in 2016 and can be competitive. National Democrats holding their party convention in Philadelphia have already implicitly acknowledged that. The remaining question is what the GOP will do about it?

In State Politics Be Careful What You Wish For

Politically Uncorrected: The Costs of Combat

Politically Uncorrected: Toomey at the Gate